Coronavirus in Africa: Authoritarianism on rise in crisis, say activists 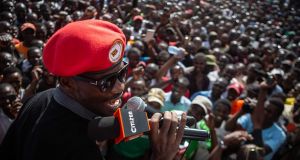 As Africa tops 500,000 confirmed coronavirus cases, activists and opposition politicians are accusing the continent’s leaders of using the crisis to increase authoritarian controls.

During an online event called “resisting the authoritarian pandemic” on Wednesday, which was led by an international group of activists called the Resistance Bureau, aspiring presidential candidates for upcoming elections in both Tanzania and Uganda spoke about their fears that civilian freedoms were being drastically curtailed.

Tanzania has only 509 confirmed coronavirus cases, though the government stopped releasing new figures months ago. President John Magufuli encouraged Tanzanians to go to churches to pray the country was saved from the disease, later claiming this had been successful and declaring that schools could reopen, as the country was “Covid-19-free”.

Mr Lissu left Tanzania in 2017, following an assassination attempt where he was shot 16 times. He said he would return to the country this month to contest an election scheduled for October.

“Dictatorships can only be fought and defeated if we are prepared to take risks and running away is not going to defeat these dictators and remove them from office,” he said.

Ugandan musician and opposition leader Bobi Wine, whose real name is Robert Kyagulanyi, said his country was experiencing “brutalisation, but I’m glad that we have a spirit of resistance”.

Mr Wine plans to run for president in January 2021, though the current president, 75-year-old Yoweri Museveni, has banned campaigning as part of the coronavirus restrictions.

“He has claimed that people of Uganda [can] use the internet to campaign, but remember this is the same president that put a tax on social media,” Mr Wine said, referring to a controversial daily “social media tax” that was introduced in 2018, which critics said was an attempt by the government to control dissent.

Wine also raised the case of Francis Zaake, an opposition MP who was arrested and says he was tortured for trying to distribute food to his constituents during Uganda’s lockdown. Uganda has fewer than 1,000 confirmed coronavirus cases and no deaths.

“With more than a third of countries in Africa doubling their cases over the past month, the threat of Covid-19 overwhelming fragile health systems on the continent is escalating,” said Dr Matshidiso Moeti, the World Health Organisation (WHO) director for Africa, in a statement on Wednesday.

“So far the continent has avoided disaster and if countries continue to strengthen key public health measures such as testing, tracing contacts and isolating cases, we can slow down the spread of the virus to a manageable level.”