Burundi’s government says it will not join peace talks 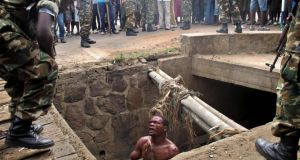 A man begs for help from the military as he stands in a drain where he had hid to escape from a mob in Burundi’s capital, Bujumbura, last May. Photograph: Aymeric Vincenot/AFP/Getty Images

Burundi’s government will not take part in peace talks with the opposition scheduled for Wednesday because it holds some of the participants responsible for the recent months of violence, a senior official said.

The talks in neighbouring Tanzania were announced last month as part of regional efforts to resolve a crisis triggered by President Pierre Nkurunziza’s decision to run for a third term in office – a move opponents said broke the constitution.

Joseph Bangurambona, the permanent secretary in Burundi’s foreign affairs ministry, said they refused to join the talks due to the inclusion of “those who are supporting violence”.

“No dialogue tomorrow, neither on January 16th as many may think, because there has been no consensus on that date,” Mr Bangurambona said on Tuesday.

He said the government was particularly opposed to the inclusion of Carine Kaneza, representing Burundian women, adding the government did not recognise her role or the organisation she represents.

He said Ms Kaneza was fired from her job as secretary at the Burundian embassy to the United States last October due to “her mistakes”. Ms Kaneza was not immediately available to comment.

“The dialogue will resume on condition that the mediators iron out the irregularities and set another agreed upon date,” Mr Bangurambona told Reuters.

Regional mediators were also not immediately available for a comment.

Thacien Sibomana, the spokesman for the opposition UPRONA party, said they had not received an invitation for the talks on Wednesday, and accused the government of railroading the talks.

“This is a government strategy to drag on this dialogue while people are continuously being killed. That is why we ask an urgent deployment of troops,” Mr Sibomana said.

Two people were injured in a grenade attack in the capital Bujumbura on Monday, the latest in the conflict. Police said they were investigating the attack.

International monitors say they fear Burundi could be heading for civil war.

The United Nations estimates 400 people have already been killed. More than 220,000 people have fled Burundi since April, and Rwanda, which has similar ethnic faultlines, says more than 73,000 Burundians are now on its soil.