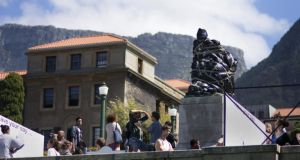 A statue of British coloniser Cecil John Rhodes is covered in plastic bags last month as part of a protest by students of the University of Cape Town. Photograph: Rodger Bosch/ AFP/Getty

Over the past two weeks, a race debate has erupted in South Africa with a speed and intensity that has rarely been seen since the first democratic election in 1994. Some fear it could mark the beginning of a race war if not handled carefully.

Unusually, the controversy does not relate directly to apartheid; its origins predate that regime. It has been triggered by a statue of the British colonialist and mining magnate Cecil John Rhodes on the campus of the University of Cape Town.

On March 10th, Chumani Maxwele and 12 other black students at the university threw human excrement over the statue of Rhodes, whose endowment in 1918 led to the foundation of the university.

The prominently-placed Rhodes statue looks out over the university and its 26,000 students, about half of whom are black. Pointing to Rhodes’s land and mineral grabs in the early 20th century, the group of students demanded that the statue of Rhodes, and other colonial symbols, be removed.

Controversy about divisive public symbols is not unusual in South Africa. After the 1994 election, the newly-elected parliament removed oil paintings of previous prime ministers. The names of buildings and streets were changed, and many statues removed. This happened even at the Afrikaans universities, which were more conservative and had provided intellectual and theological support to the apartheid government.

The English universities – historically anti-apartheid and liberal – had less to prove. Thus, only now, 21 years after the democratisation of South Africa, are they being forced by the actions of one student to deal with their divisive symbols.

At the University of Cape Town a young white male was accused of racially abusing and then urinating on the head of a black taxi driver last year, and a black cleaner was badly injured after some white students attached her in a parking lot a few months ago.

These incidents have shown that the recent protests are about more than Rhodes and the other colonial symbols on campus. Over the past two weeks, black students have expressed a deep sense of alienation that many of them still experience.

However, many whites – English-speaking whites, in particular – have shown little understanding of the students’ frustrations.

Radio shows and the letters pages of newspapers have been bombarded with comments, mainly from English-speaking whites, dismissing the black students as arrogant, delusional and without manners. Many have argued that black students should leave the university if they are unhappy, and that black recipients should decline or pay back Rhodes scholarships.

Prof Xolela Mangcu, senior professor in sociology at the University of Cape Town, wrote in an article this past week that his biggest fear was that black people would no longer take this kind of racial abuse and that South Africa would find itself in “the racial civil war we averted in 1994”.

Deeply concerned about the issue, the mayor of Cape Town, Patricia de Lille, has launched a campaign to eradicate racism in Cape Town and has called on the national government to deal with the issue of race relations across the country.

However, Julius Malema, opposition member of parliament and leader of the Economic Freedom Party, raised racial tensions further when he said: “It is that statue that continues to inspire [whites] to think that they are a superior race, and it is through collapsing of these types of symbols that the white minority will begin to appreciate that there’s nothing superior about them.”

Malema also challenged his followers to take the statues down, using any methods necessary. This led to the intervention of minister of arts and culture Nathi Mthethwa, who said that he didn’t support the violent removal of the statue and that a process of public consultation would have to be followed.

At a packed and emotionally charged meeting in Jameson Hall at the University of Cape Town last week, students and lecturers debated the issue and voted for the immediate removal of the statue and other colonial symbols. However, this has to be confirmed by both the University Council and by the National Heritage Council.

It will be some time before a final decision is made, but the debate on race relations in South Africa continues. In the meantime, the university has covered up the statue of Rhodes with metal poles and wood, leading to a newspaper headline: “Rhodes finally in a cage.”

Melanie Verwoerd is a former South African ambassador to Ireland