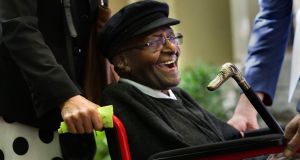 Nobel laureate Desmond Tutu shed tears of gratitude on his 85th birthday as he presided over a cathedral Mass despite his poor health, after saying he would like the option of a “dignified assisted death” when the time comes.

The former archbishop was taken into St George’s Cathedral, Cape Town, in a wheelchair and was later helped to his feet in church robes, a crucifix around his neck, for the Anglican ceremony.

He wiped away tears and gave thanks at the sight of friends and well-wishers in the congregation.

“I am just trying to draw attention to myself,” an emotional Archbishop Tutu said with trademark humour, drawing laughter. He was comforted by another priest and his daughter, Mpho Tutu van Furth.

Archbishop Tutu, an anti-apartheid campaigner who has spoken on human rights long after the 1994 end of white minority rule in South Africa, has been treated in hospital several times since last year because of infections linked to past treatment for prostate cancer.

He has been treated for the cancer for many years, and his family previously said the disease was under control.

In a column in the Washington Post, Archbishop Tutu said he believed in the “sanctity of life” but also reiterated his support for “assisted dying” for terminally ill people who seek that option.

“I have prepared for my death and have made it clear that I do not wish to be kept alive at all costs. I hope I am treated with compassion and allowed to pass on to the next phase of life’s journey in the manner of my choice,” he wrote.

He said he supported initiatives for assisted dying laws in the UK, the US, South Africa and elsewhere.

“In refusing dying people the right to die with dignity, we fail to demonstrate the compassion that lies at the heart of Christian values,” he wrote. “I pray that politicians, lawmakers and religious leaders have the courage to support the choices terminally ill citizens make in departing Mother Earth. The time to act is now.”

He was awarded the Nobel Peace Prize in 1984 for his peaceful campaign against apartheid. His birthday this year fell on the day Colombian president Juan Manuel Santos was awarded the prize for efforts to end war in his country.

“He continues to inspire the nation and the world in the promotion of human rights, justice and the wellbeing of all, especially the poor,” Mr Zuma said.