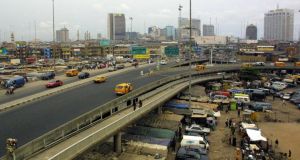 Makeshift homes under a Lagos flyover. On February 23th, inhabitants of Badia East in the city were left homeless by state authorities who bulldozed their houses without consultation. Photograph: Pius Utomi Ekpei/AFP/Getty Images)

Satellite images taken before a recent mass forced eviction in Nigeria that made nearly 9,000 people homeless contradict a state official’s justification for the residents’ removal, Amnesty International has claimed in a new report.

On February 23th, the affected inhabitants of Badia East in Lagos were left homeless by state authorities who bulldozed their houses without consultation or notification about the eviction or when it was going to take place.

The larger Badia community is one of nine settlements supposed to benefit from the World Bank-funded Lagos Metropolitan Development and Governance Project, a $200 million initiative designed to “increase sustainable access to basic urban services”.

However, according to Amnesty’s report Nigeria: Forced Eviction in Badia East, Lagos State, the cleared area has been earmarked for a housing development project by the state ministry of housing that does not form part of the World Bank initiative.

First phase
Amnesty says Lagos state’s attorney general, Ade Ipaye, told its researchers in an interview in May that this eviction was the first phase of its plans to clear out the whole of Badia East in order to redevelop the area and to evict most of the existing residents.

“If these plans proceed, then tens of thousands will be at risk of forced evictions,” the report says. “In addition, the entire World Bank intervention investment in Badia risks being diverted from the intended beneficiaries, Badia residents, to more affluent residents of Lagos state.”

Although Mr Ipaye acknowledged that people had been evicted during the clear-out, Amnesty has claimed the state commissioner for housing told it that the areas affected by the demolition contained no houses and was just a rubbish dump.

However, satellite images from before and after, commissioned for the investigation into the incident, reveal the commissioner’s claim as a fabrication, Amnesty says.

Razed houses
A photograph taken on February 8th, before the demolition, clearly shows high density structures, which contrasts markedly with a later image taken on April 8th that shows the razed houses.

“At least 266 structures that served as homes and businesses were completely wiped out, affecting an estimated 2,237 households. At a minimum, close to 9,000 people were affected. No alternative housing was provided by the Lagos state government and people were left homeless after the demolitions.”

The report, which was co- authored by the Social and Economic Rights Action Centre, looks at the impact of the demolitions on the Badia East community and documents the failings of the Lagos state government.

Many of the victims are still sleeping out in the open under a nearby bridge while others have erected makeshift shelters. Some say they are suffering from malaria or typhoid after living in the open but can no longer afford to pay for medicines and treatment.