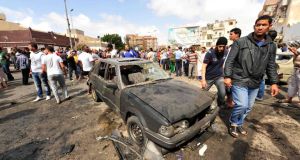 People gather at the scene of a car bomb explosion outside a hospital in Benghazi. Photograph: Esam Al-Fetori /Reuters

A car bomb exploded today at one of the largest hospitals in Libya, killing 12 people and wounding 30.

The bomb devastated wards and left cars burning outside the al-Jala hospital - one of Benghazi’s two main hospitals.

A witness said the bomb exploded in the car park, near patients and visitors entering the main gate.

“The bomb was between the hospital and a house, some houses,” the witness said. “It was a mess, it is finished. There are 12 dead, some of them women and children, there are a lot of people who have wounds. About 10 cars were broken.” He said he did not know who was responsible for the bomb, saying the hospital was guarded by the army.

Attackers used a remote control to detonate the explosives-laden car, which was parked outside a bakery near the city’s main hospital. Weapons including Kalashnikov rifles were found inside the car. Fathi al-Ubaidi, a top commander of Libya Shield pro-government militias, says one man has been arrested but refused to give further details.

The blast follows the bombing of four police stations over the weekend. Benghazi is home to several Islamist militias and was where US ambassador Chris Stevens was killed last September during an attack on the US consulate.

The al-Jala hospital was until recently guarded by the Ansar al-Sahria Islamic militia, blamed by some for the consulate attack, and has been the scene of sporadic standoffs between government and militia forces in recent months.

Militia violence has centred on Libya’s new isolation law, which bans senior officials from the Muammar Gaddafi era from holding senior posts in police, government, politics and the judiciary.

The fear of further violence has led to the British and US embassies withdrawing some staff, the EU closing its mission in Tripoli and BP announcing it was pulling out non-essential staff.

Benghazi has been a centre of jihadist violence for more than a year, with attacks on the British, Italian and Tunisian consulates and the burning of a Coptic-Egyptian church.