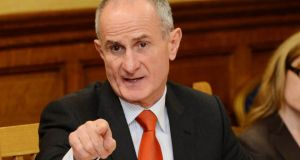 The UN Committee Against Torture criticised the inquiry into the Magdalene Laundries that was chaired by former senator Martin McAleese, saying it lacked many elements of a “prompt, independent and thorough” investigation. Photograph: Sasko Lazarov/Photocall Ireland

The United Nations torture watchdog has criticised the McAleese inquiry into the Magdalene laundries, saying it lacked many elements of a “prompt, independent and thorough” investigation.

The UN Committee Against Torture wrote to the Government last month asking for information as to measures the State was planning to take “to ensure there is a full inquiry into all complaints of abuse”, as the committee had originally recommended.

Taoiseach Enda Kenny apologised to women who had spent time in Magdalene laundries after the inquiry, chaired by former senator Martin McAleese, found that the State played a significant role in sending thousands of young women to the institutions.

However, groups representing the women believe the report did not fully capture the prevalence of abuse and ill-treatment in the laundries.

In a letter to the Irish Ambassador to the UN in Geneva, Gerard Corr, the torture committee said it had received information from several sources highlighting that the McAleese report, despite its length and detail, “did not conduct a fully independent investigation into allegations of arbitrary detention, forced labour or ill-treatment”.

Survivor testimony
The committee had also received information that the State was presented with extensive survivor testimony in the form of reports by the Justice for Magdalenes group “and was aware of the existence of possible criminal wrongdoings, including physical and psychological abuse”.

In the letter, dated May 22nd, Felice Gaer, rapporteur for follow-up on concluding observations at the committee, wrote: “With these factors in mind, the committee would appreciate further information as to the measures the State party is planning to take to ensure that there is a full inquiry into all complaints of abuse, in accordance with the committee’s original recommendation.”

The Government responded to the McAleese report in February by asking the president of the Law Reform Commission, Mr Justice John Quirke, to recommend how it should assess financial and other types of support it can provide to the women. It is understood his report has been delivered to the Department of Justice and a fund is expected to be set up on foot of it.

On the issue of redress, the UN committee asked the Government to clarify how it intended to ensure that the proposed fund would be primarily used to help victims and survivors rather than being used to cover legal or administrative costs. It added: “What measures are being put in place to help institutionalised survivors to engage with the redress processes?”

The committee said it was also concerned that the work of Mr Justice Quirke was “premised on the incomplete investigations carried out by the McAleese committee”.

Speaking on RTÉ radio yesterday, Ms Gaer said that while the committee was pleased to see the Government set up an inquiry and apologise to the women, the McAleese report did not constitute “an independent investigation in all ways”.

She said the McAleese inquiry, while headed by “an extremely well-regarded and independent individual”, comprised civil servants drawn from Government departments whose involvement in the Magdalene laundries was under examination.

‘Limited inquiry’
Ms Gaer pointed to the fact that the inquiry was empowered to ask only for the voluntary submission of information and that there were no public hearings. “From our point of view, it was a limited inquiry,” she added.

Claire McGettrick of Justice for Magdalenes said it shared many of the concerns raised by the UN committee. The group had submitted 796 pages of testimony to the inquiry team, but “not one syllable” drawn from those documents appeared in the final report.

“The McAleese report should not have gone as far as alleging that there was little abuse in the laundries because that’s simply not true,” she said. “The survivor testimony is absolutely consistent over decades.”

Midlands lockdown: Movement restrictions in place for residents of Kildare, Laois and Offaly 19:04
Authorities urge mask wearing as coronavirus on the rebound in Europe 18:56
Main points: What restrictions have been imposed on Kildare, Offaly and Laois? 18:49
Court upholds challenge by intellectually disabled man who wants to marry 18:46
Wildfire forces suspension of play at Wentworth Golf Club 18:42