State argues 'no right to suicide' 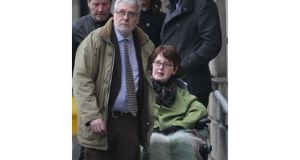 Suicide is a serious social problem with "appalling consequences" for family, friends and community and its decriminalisation did not create a right to suicide, the State has told the Supreme Court.

If there is a legal right to take one's own life, there is no constitutional right, Michael Cush SC argued. The policy of the law remains "adverse to all suicide" and that was why aiding and abetting a suicide is an offence, he stressed.

"Suicide is regarded as a real problem," he said.

While the State has sympathy for terminally ill Marie Fleming, who wants to be assisted in taking her own life, the State insisted there was no constitutional right to such assistance.

He was making submissions in the continuing appeal by Ms Fleming against the High Court's rejection of her challenge to the absolute ban on assisted suicide set out in Section 2.2 of the Criminal Law Suicide Act 1993.

Ms Fleming (59), living in Co Wicklow, is in the final stages of multiple sclerosis and says she needs to be assisted to fulfil her wish of a dignified death at a time of her choice.

She claims, in her particular circumstances as a severely disabled person unable to take her own life unaided, the ban disproportionately infringes her personal autonomy rights under the Constitution and European Convention on Human Rights.

She also claims the ban is discriminatory in that an able-bodied person may take their own life lawfully but she cannot be lawfully helped to do the same.