Background: The landmark Church of the Annunciation in Dublin faces several issues 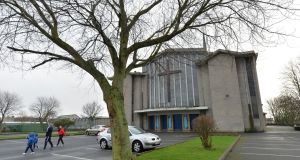 The Church of the Annunciation in Finglas West, Co Dublin. Photograph: Alan Betson

The former bishop of Galway, Michael Browne, was given to monumental ways. While he was in Galway, from 1937 to 1976, the city’s cathedral of Our Lady Assumed into Heaven and St Nicholas was built with a capacity for 2,000 worshippers.

Opened by Cardinal Richard Cushing of Boston in 1965, its website describes it as the “most recently built of Europe’s great stone cathedrals”.

Even back in the 1960s, in an era when building gargantuan churches was not unusual in Ireland, the size of Galway cathedral stood out. Some local people referred to it as Taj Micheál.

Not to be outdone, an even more formidable prelate went one better. In October 1967, the archbishop of Dublin, John Charles McQuaid, opened the Church of the Annunciation at Finglas West with a capacity of 3,500.

Similar-sized churches were built at the time in Donnycarney and Artane, also in north Dublin.

Today between 800 and 900 people attend weekly Sunday Mass in the Finglas West church out of a local Catholic population of about 9,500 in the 2011 census.

The church building is in poor repair. “It’s impossible to heat, there’s water seeping in, and the congregation is elderly”, said Fr Richard Shannon, a priest in the parish.

Consultations on the church’s future have been taking place in the parish for some time, he said, and it has been agreed in principle that it should be demolished and replaced by a smaller building, with the freed-up space used for social housing and accommodation for the elderly.

A posting on the Finglas parish website by parish priest Fr Éamann Cahill says it “has struggled for many years with extensive building problems in their church”.

“Following recent research, discussion and much analysis, the parish pastoral council, the finance committee and the parish team agreed that it would be best to replace the present church building with a new church.”

The archdiocese agrees with this plan, he said, adding “it is also proposed to build some pastoral facilities with the new church, eg meeting rooms, coffee/tea dock, offices etc”.

Coda Architects has been asked to examine the possibility of replacing the existing building with a more modest structure that will accommodate 350 people.

1 Covid-19: Taoiseach warns of restrictions in Ireland’s cities as hospital cases pass 100
2 People asked not to cross Border as Donegal prepares for Level 3 restrictions
3 How Finland kept Covid-19 in check and protected its economy
4 Covid-19 cases higher in areas with large proportion of renters, CSO says
5 Aer Lingus staff say they are living in ‘near poverty’ and unable to cover rent
Real news has value SUBSCRIBE