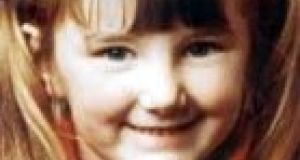 Mary Boyle was six years old when she went missing on March 18th, 1977, from her grandmothers house near Ballyshannon, Co Donegal.

The twin sister of Mary Boyle (6), who went missing in 1977, returns from Washington DC today after a series of meetings in her campaign for a public investigation of the case. Ann Doherty met congressmen Brendan Boyle, Richard Neal and Jim McGovern and well as former congressman Bruce Morrison during her four-day visit to Capitol Hill. She also met Fr Seán McManus of the Irish National Caucus.

Ms Doherty raised her concerns about alleged Garda irregularities in the investigation as well as her wish that an inquest be held into Mary’s death.

Mary Boyle vanished 39 years ago today from the family farmland near Ballyshannon, Co Donegal. Ms Doherty believes her sister was sexually assaulted and murdered. Ms Doherty said she was “very happy” with the meetings, particularly with Pennsylvania congressman Mr Boyle, whose father is from Glencolumbkille, Co Donegal.

“I have to say I have encountered more concern for my sister here than in the corridors of power in Ireland. You can get meeting with people in Washington but at home you can’t get a meeting with anyone.”

A spokesman for the Minister for Justice said: “The department understands that the Garda investigation into the disappearance of Mary Boyle is open and ongoing and that Ms Doherty has made a detailed statement to gardaí as part of that process. It would not be appropriate for the department to comment on any particular line of inquiry in this investigation.”

A Garda spokesman said the disappearance was the subject of an ongoing investigation. Two years ago, a man was questioned about the abduction and released without charge.