Opinion: Reaction to the death of Michael Jackson and Princess Diana felt like nothing so much as the incantations of a religious cult at the creation of a martyr 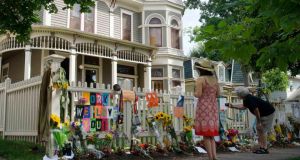 ‘Millions of strangers found themselves “devastated” and “bereft” at the news of Robin Williams’s death’. Above, a woman looks at an impromptu memorial to Robin Williams outside the house used in Mork and Mindy in Boulder, Colorado. Photograph: Rick Wilking/Reuters

The death of Robin Williams was a sad event. The actor, who took his own life following a long battle with depression, leaves behind three children and a distraught wife. Williams was a significant figure in the entertainment business and, like most newspapers, The Irish Times published tributes and obituaries. This is as it should be.

I was sorry to hear the news, but I did not cry or experience anything like proper grief. After all, I am not related to Robin Williams. I have never met Robin Williams. I know nobody directly affected by his loss.

That all seems sane enough. Out there in the wider world, however, millions of strangers found themselves “devastated” and “bereft” at the news. A random sampling of Twitter drags up a surprising number of users who “can’t stop crying”.

Such gushing had happened in the past. There were reports of women flinging themselves from windows when actor Rudolph Valentino croaked in 1926. But the princess of Wales’s death marked the point at which recreational grieving reached epidemic proportions.

A nation that had once prided itself on a phlegmatic approach to emotional matters allowed large parts of the capital to be engulfed in oceans of petrol-station bouquets and cheap cuddly toys. Oddly, rather than being dedicated to the bereaved relatives, as was traditionally the pattern, the lilies and teddy bears were inscribed to the unaware deceased.

There has, in the UK, been some foot shuffling about those events over the succeeding years. More than a few supposed mourners now feel a little embarrassed about the undignified sobbing and unacceptable tolerance of Elton John numbers.

But the advent of social media only increased the metaphorical rending of garments. Everybody wants to be seen to care. Expressing implausible grief is a way of communicating your great sensitivity.

What on earth is going on? The manufactured sorrow at the death of figures such as Princess Diana or Robin Williams is, to some extent, connected with a need to celebrate one’s own life. Your dad may have taken you to see Aladdin. You may remember sitting exams when the princess’s wedding was taking place (as I did). A little part of your life has just moved away.

There is, however, more to it than that. The decline in organised religion is another factor. We all know the old GK Chesterton aphorism: “When men choose not to believe in God, they do not thereafter believe in nothing, they then become capable of believing in anything,” he famously remarked.

Creation of a martyr

More significant still is the fact that, in western societies, we no longer encounter genuine bereavement quite so often. Less than a hundred years ago, it was still depressingly common to lose a brother or sister before they reached adulthood. Parents regularly keeled over in early middle age. By the time a person left school, he or she would, most likely, have undergone sufficient lacerating grief to find the recreational sort utterly inexplicable.

Even now, those mourning a parent, sibling or spouse must find the digital wailing at a stranger’s demise more than a little offensive. These people aren’t grieving. They’re just passing the time. Mind you, few of them passed the time by “grieving” for poor Lauren Bacall. The death of an old person is not, it seems, sufficiently tragic.

Five years after Kathryn Bigelow became the first woman to win an Oscar for best director, a less celebrated, but equally significant, breach has been made in a hitherto male preserve.

Last week, we learnt that Maryam Mirzakhani, an Iranian professor at Stanford, was to receive one of the four Fields Medals awarded this year for outstanding achievement in mathematics.

Mirzakhani is the first female among the 56 winners of the Fields Medal since its inauguration in 1936.

The average layperson can be forgiven for struggling to grasp the nuances of her achievement – a harnessing of topology, complex numbers, hyperbolic geometry and calculus – but it would be nice if more people celebrated her demolition of another crystal ceiling. Obviously, the sums are all child’s play to me.