Government delegation told it has obligations under international covenant 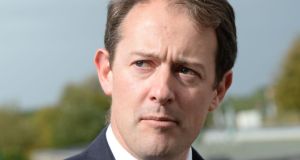 Minister for State for Foreign Affairs Seán Sherlock. Mr Sherlock is leading the Government delegation to the UN Committee on Economic, Social and Cultural Rights in Geneva. Photograph: Brenda Fitzsimons

Despite austerity and fiscal constraint, the Irish State has international legal obligations to protect core economic and social rights, a Government delegation was told at the United Nations yesterday.

The chairman of the UN Committee on Economic, Social and Cultural Rights, Walid Sa’di, addressing the delegation, urged members to “familiarise yourself with general comment 3 of the committee” before returning to answer further questions this morning.

General comment 3 refers to the immediate obligations on states that have signed the International Covenant on Economic, Social and Cultural [ESC] Rights to ensure no group in society is discriminated against in its enjoyment of core rights in such areas as housing, education and health.

Ireland is appearing before the committee for the first time since 2002. It is being examined on its compliance with the covenant and in particular how it has performed through the last seven years of austerity.

The committee, which will examine Ireland for a second day today, is showing a particular interest in the way in which such sectors as women, children, Travellers, survivors of Magdalene laundries, asylum seekers, the poor and the disabled, have fared in Government budgetary decisions.

Minister of State for Foreign Affairs Seán Sherlock is leading the Irish delegation in the company of the Irish Ambassador to the UN in Geneva, Patricia O’Brien, and 20 senior civil servants from across Government departments.

The delegation was also asked about a recommendation from the constitutional convention that there be a referendum to insert ESC rights into the Constitution and when it would be held.

Paula O’Hare, advisory counsel at the office of the Attorney General, said there would be “resource implications” if the covenant was to be made justiciable in Irish courts, and she referred to the “progressive realisation of rights in that regard”.

“State parties commit to do the best they can within the resources available in the context.”

The covenant was to a large degree incorporated into Irish law, she said.

Mr Sherlock, in his opening reply to the committee’s questions, said the scale of the crisis that faced Ireland in 2008 had been “gargantuan” and that Ireland had been at the “eye of a perfect storm”.

“The first response when the crisis hit was to ensure we had a minimum level of social protection.”

The spend on social protection measures as a proportion of the total Government budget increased by 37 per cent between 2007 and 2015, he said.

Several committee members asked about abortion, including whether the Government planned a referendum to repeal Article 40.3.3 to the Constitution, which guarantees to vindicate the equal right to life of the unborn and the pregnant woman, whether clarity would be provided to women and clinicians about when an abortion was legal, and how the current regime was consistent with the non-discriminatory right in the covenant to healthcare.

Geraldine Luddy, principal officer in the Department of Health, said she acknowledged the “abortion law in Ireland is very limited” and she set out the current legal situation.