Treatment of asylum seekers may be ‘our next national scandal’, warns Ombudsman

Decisions on their welfare being wrested ‘from us the people’, Emily O’Reilly says 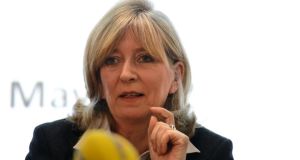 Ombudsman Emily O’Reilly has warned Ireland’s treatment of asylum seekers “may well be in breach of not just our own Constitution but also international human rights conventions”.

She referred to a case her office dealt with “which showed the failure of State agencies to uphold their own obligations in relation to an asylum seeking mother and her two young daughters”.

This failure “effectively sundered that family unit”, she said.

If “the same thing happened an Irish citizen family the scandal would have been of immense proportions” whereas publication of her report on the case recently “ made barely a ripple,” she said.

Ms O’Reilly was speaking in Dublin today at the launch of the summer 2013 issue of the Jesuit quarterly Studies, in which she has a hard-hitting article titled Asylum Seekers in Our Republic: Where Have We Gone Wrong?.

The article concludes that Ireand’s treatment of asylum seekers amounted to “a collective failure of a republic which needs to re-engage with what ought to be its core values”.

She said under the current asylum process “an entire early childhood, virtually an entire adolsence can be spent in direct provision accommodation”.

She contrasted that reality with “our most recent espousal of national virtue and empathy” when we voted yes in the referendum on children’s rights .

She asked: “Is this our next national scandal looming? Will some future Taoiseach tearfully issue an apology to the children who suffered under this regime? Will some kindly judge be selected to complete the compensation package and will we all shake our heads in bewilderment and wonder how all of this happened?”

She recalled how “some years ago in the wake of reports on the institutional abuse of children in care I pondered the phenomenon of hiding in plain sight. I remarked that those widespread abuses did not take place in isolated places. That the abuse was not carried out or either sanctioned or ignored by strangers to our shore. Rather the insitutions were starkly visible on the landscape of our towns and villages and not to know about either their existence or to have a fairly good idea about what went on within their walls was simply not an option.”

“Decisions about their welfare are in addition, in effect, also wrested from us the people. Whenever asylum seekers are in danger of securing the benefit reserved, in the mindset of some parts of the administration only for legitimate residents on our shores, a law is passed or a regulation tweaked with impressive and, dare I say, unusual speed to have it quickly removed.”

Also speaking at the launch, Eugene Quinn of the Jesuit Refugee Service pointed out that “one in three asylum seekers have been waiting at least five years and one in ten more than seven years for a final decision on their application for protection from the Irish State”, while almost a third of asylum seekers were children.

One of the most severe restrictions placed on them was the refusal to permit them to work, he said.

Michael Farrell of the Free Legal Advice Centres, had worked on the case to which the Ombudsman referred. He criticised “the meanness” of the social welfare system where asylum seekers were concerned.

This was most evident in the €19.96 weekly monetary allowance per adult, he said, and the fact that the universal child benefit “available to the children of millionaires”, was denied them. That, he believed, was “fundamentally discriminatory.”

Independent TD Maureen O’ Sullivan described the situation was “a massive scandal which is going to come back on this country.”