Immediate priority is to ensure council gets emergency accommodation for families, says solicitor 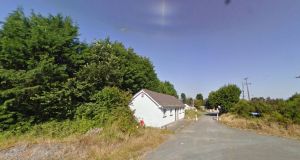 Louth County Council said its decision to evict Traveller families from Woodland Park (above) on the outskirts of Dundalk was based “solely on its concerns for people’s health and safety”. File photograph: Google Street View

The solicitor representing 23 Traveller families evicted from an unofficial halting site in Dundalk, Co Louth, over the weekend plans to take a human rights case against Louth County Council.

Eleanor Kelly said the immediate priority was to ensure the council provided emergency accommodation for the families, which include young children and infants.

“We will meet officials again in the morning to see what can be done in the short term,” Ms Kelly said on Monday. “In the longer term we will be engaging a senior barrister with expertise in human rights to look at this case from a rights perspective.”

The council said its decision to evict the families from Woodland Park on the outskirts of the town was based “solely on its concerns for people’s health and safety”.

Woodland Park, which had been an authorised site until it was closed in 2008, had been illegally occupied by the families since April 2015, it said.

A spokeswoman said a fire and safety audit of the site noted “the layout of and facilities on-site were in contravention of most of the fire-safety recommendations” from the Department of the Environment for residential caravan parks.

The audit was conducted in the wake of the Carrickmines tragedy, in which 10 people died in a fire on an unofficial site in Dublin last October.

The families said they had been given no time to find alternative accommodation and no indication gardaí would arrive on the site on Friday morning.

They said the eviction had been conducted in a “heavy- handed” manner that “terrified children”, and added they had nowhere to go after their caravans were removed from the council-owned site.

Ten families moved their vans themselves and on Monday remained parked on a vacant site nearby. They do not have authority to be there, however, and could be moved on under criminal trespass legislation.

Though most families have sourced or been provided with emergency accommodation, three couples, including one pregnant woman, said they had been sleeping in their cars.

The council said it would review its 2014-2018 Traveller accommodation programme, which was drawn up before the families moved on to the site, to assess “future needs”. It will also help the families to source private rented accommodation and provide Traveller group housing within three years.

Rebecca Quinn, who lived at Woodland Park, said the families did not want rented accommodation and that such housing adversely affected their mental health.

Local Sinn Féin TD Gerry Adams called for the refurbishment of Woodland Park, saying the matter had been handled “disgracefully”.