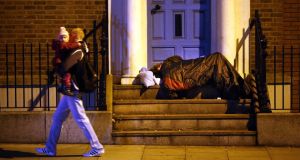 A homeless man sleeping on Kildare St in Dublin. “Great disparities in wealth and power divide society into the rich and the poor.” Photograph: Dara Mac Dónaill/The Irish Times

Ireland needs a new guiding vision. The economic crisis of recent years is principally the result of the failure of an economic and social philosophy that exalted private greed above the common good.

The response to the crisis has been guided and underpinned by many of the mistaken assumptions of the Celtic Tiger years. Many of the progressive social programmes introduced during the previous 20 years have been eroded or abandoned and the State remains committed to the low tax model of the early 2000s. A lazy reliance on outworn neo-liberal dogmas is disguised by frequent declarations that “there is no alternative”.

Ireland should not continue to be guided by the failed ideologies of the past. The current crisis demands an immediate policy response but it also requires the development of a new guiding vision for Ireland. We must ask the question: what vision of Ireland’s future should guide policy decision-making? The decisions taken in the period ahead will shape Irish society for decades to come.

An alternative vision of Ireland’s future is urgently needed. This vision should prioritise the common good and provide economic and social security for all people in Ireland while ensuring that all policy decisions are focused on delivering a future that is sustainable economically, environmentally and socially.

Such a vision requires radically different policies to those pursued by the Government and the EU/IMF/ECB. Ireland is still a wealthy country, despite its recent challenges, and still has the resources and skills to achieve “liberty, justice and equality for all its citizens”, in the words of the Democratic Programme of the first Dáil (1919). What has been missing is the resolve, the will and the vision to achieve a New Ireland.

Ireland should be guided by a vision of becoming a just society in which human rights are respected, human dignity is protected, human development is facilitated and the environment is respected and protected. The core values of such a society would be human dignity, equality, human rights, solidarity, sustainability and the pursuit of the common good.

Human dignity is central to this vision. It demands that all people be recognised as having an inherent value, worth and distinction regardless of their nationality, gender, ethnicity, culture, sexual orientation or economic and social position.

The need for greater equality is closely linked to the recognition of human dignity and the desire for social justice. Great disparities in wealth and power divide society into the rich and the poor, which weakens the bonds between people and divides society between the lucky and the left-out, between the many and the few. A commitment to equality means that society enables all people to achieve their potential.

Solidarity is the recognition that we are all bound, as human beings, one to another, within nations, between nations and across generations. Many policy decisions taken in recent years are unjust to future generations. Solidarity requires all people and all nations to recognise their duties to one another and to vindicate the rights of others. Solidarity enables people and communities to become the shapers of their own destiny.

Sustainability is a central motif for economic, social and environmental policy development. It is crucial that we recognise that economic development, social development and environmental protection are complementary and interdependent. None of these objectives can be achieved by ignoring any of the others. Respect for the natural environment is not a luxury to be indulged in but an imperative that cannot be ignored.

A commitment to the common good is also critical. The right of the individual to freedom and personal development is limited by the rights of other people. The concept of the “common good” originated more than 2,000 years ago in the writings of Plato, Aristotle and Cicero. More recently, the philosopher John Rawls defined the common good as “certain general conditions that are...equally to everyone’s advantage”. The common good consists primarily in having the social systems, institutions and environments on which we all depend work in a manner that benefits all people simultaneously and in solidarity.

There are many policy areas that are outside Ireland’s control at present and this has contributed to a sense of helplessness amongst Irish people. However, even within the confines of the EU/IMF/ECB programme there are real choices to be made. Irish society needs a serious debate about its economic and social priorities. Otherwise decisions will be made that run contrary to the common good.