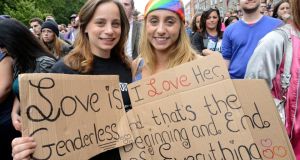 Thousands of people marched to the Department of Justice in Dublin this afternoon, in favour of extending marriage rights to gay and lesbian people in Ireland. Those behind the sixth annual March for Marriage including LGBT Noise and Marriage Equality said they hoped this would be the biggest - and last - gathering for marriage rights before a referendum on the issue in 2015.

Organisers said 8,000 people took part in the march, many of whom held signs reading “equal”. Some dressed in sashes and tiaras after the news that the newly crowned Rose of Tralee, Maria Walsh had publicly come out as lesbian.

Newstalk broadcaster Dil Wickremasinghe strongly criticised the recent BAI “balance” ruling against the Derek Mooney RTE Radio 1 show, saying, “every discussion on marriage equality does not have to descend into a debate about the rights and wrongs of homosexuality.” Wickremasinghe concluded her speech by saying, “Stand shoulder to shoulder. People of Ireland, rainbows are ahead of us. We are on the right side of history.”

Marriage Equality’s Gráinne Healy asked the crowd to check the electoral register to make sure they and their friends and family are registered to vote. “Your small change will help us to make big changes,” she continued, citing the cost of a large-scale referendum campaign.

The march was notable for the number of straight people marching alongside LGBT people, along with families, and an almost endless array of colourful banners and signs. Representatives from LGBT youth organisation BelongTo, INTO LGBT Teachers’ Group, the USI, trans rights organisation TENI, and LGBT Pavee representing the Traveller community also spoke.

Irish Times journalist Fintan O’Toole called for Irish society to replace “tolerance” of LGBT people with “citizenship”. He told the crowd “what we’re asking for is a recognition of a change that has already happened... The slogan I would suggest is ‘if you want a Republic, put a ring on it.’”