Opinion: The gap in health between the best-off and worst-off children has doubled in the three years after the bank guarantee 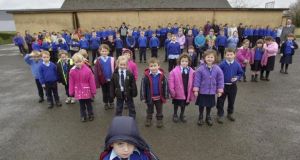 Love is the most important thing to shape a child’s life. But it is not the only thing.

The cliche is that children are our future: by about 2020, the number of children under 14 in the Republic will hit the million mark for the first time. If so, the future is a deeply contradictory place. On the one hand, current official strategy makes a blithely optimistic assumption about what the children of the great recession are going to be like when they grow up.

They’re going to rich and successful. How else, after all, will they be able to cope with the levels of public debt – €200 billion – that have been left to them by the era of bank bailouts and low growth? On the other hand, those very policies are already blighting this supposedly wonderful future.

We actually know quite a lot about the future: we can see it in the faces and bodies of kids as young as three. We know, for example, that one child in every four is living in a home where nobody at all has a job (In 2010, 22 per cent of all Irish households were jobless; the next highest proportion in Europe – the UK – was 13 per cent). And we know, because we’ve been here before, that this will have a devastating effect on their chances in life. Where there is no work, there is poverty – two- thirds of those in consistent poverty are in jobless households. And poverty taints everything. It is the ultimate form of child abuse.

Many Children Left Behind
We can actually see this happening through the Growing Up in Ireland study, which is tracking a representative cohort of 11,000 children through their lives. As it happens, the study started to examine these children and their parents at the same time as Brian Cowen and Brian Lenihan panicked and agreed to guarantee all private bank liabilities. That decision, and the absolute determination to follow through on its implications come what may, is public and political. But it becomes, in every household, private and intimate. For the children who were nine months old in September 2008, it is as much a part of their inheritance as the DNA in their cells. While the banks were getting one kind of guarantee, many of them were getting another – a guarantee of all the disadvantages that flow from poverty. The policy of No Bondholder Left Behind is also a policy of Many Children Left Behind.

The most obvious reality for what we might call the Children of the Fall is a huge increase in financial stress. In 2008, 44 per cent of children were in families who were having difficulty making ends meet. By 2011, when the study looked at them again, 61 per cent were in such families. Money is not, of course, the only thing that shapes a child’s life – love is much more important. But money does matter, especially when there’s just not enough of it. And it’s not entirely divorced from love – when parents are under stress because of money, their relationships with their children are harmed.

Effects of the recession
It may not have been open to governments since 2008 not to inflict pain – but it was open to them not to inflict pain on those who could least bear it. Those who can least bear it are children in families at risk of poverty. Even in the first three years of the crisis – when budgets were actually fairer than they have been under the present Government – very little effort was made to protect them. On the contrary, the effects of the recession have been concentrated disproportionately among those who were already struggling. In the Growing Up in Ireland study, just 14 per cent of mothers in the top tranche of earners said the recession has had a “very significant” effect on them. The equivalent for mothers in the bottom tranche was 34 per cent.

Hence the silent scandal that we can see the effects of this inequality even in very young kids. The starkest reality is that the health of the children in families where there is no work declined very substantially after the bank bailout. In September 2008, 79 per cent of these kids were classed as “very healthy”. By 2011, just 67 per were very healthy.

This decline in health was linked to a rise in inequality: the gap in health between the best-off and worst-off kids doubled in size in the three years after the bank guarantee. Given the turn towards even greater inequality under the present government, it is highly likely that these effects have become even worse in the meantime.

Social, economic and fiscal costs
We can’t say we don’t know the cost of this poverty and inequality in childhood. The personal costs, in direct suffering and in wasted potential – are terrible. But the social, economic and fiscal costs are also as nasty as they are predictable. Ireland will literally pay a very high price in chronic ill health, obesity, educational underachievement, crime and the deepening of an inherited culture of worklessness.

This is the other side of so-called fiscal responsibility – the fiscal recklessness of building up massive future costs. The black joke is that not only do we ignore these costs – we imagine that these same kids will pay off the vast debts we have bestowed on them.

Cervical campaigner Stephen Teap wins Cork Person of the Year Award 19:16
Driver may have travelled 22km with explosive device attached to car 19:08
Destitute in Dublin: ‘You are vulnerable in a tent. Nowhere is safe’ 18:43
Dublin homes within walking distance of park are worth more, conference told 18:08
Man who denies murdering he father says he was his mate 18:07