All available resources should be utilised for society’s most vulnerable 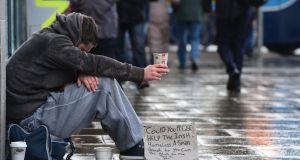 Tax cuts should not form part of the next budget and taxes should instead be raised with all available resources going towards services for the society’s most vulnerable, according to Social Justice Ireland.

“This is not the time to cut taxes...all available resources should be used to protect the young, the old and everyone in between,” director Dr Seán Healy said at the launch of Social Justice Ireland’s pre-budget submission.

Just taxation forms one of five pillars of what the organisation says should form part of the Government’s priorities for Budget 2016.

In its pre-budget submission Dr Healy said Ireland’s total tax needed to be brought up to the EU average, however, he said taxes needed to be increased equitably.

He added that a “fair share” of corporate profits should be secured for the State.

Dr Healy said Ireland was in the midst of a serious housing crisis while there were also serious problems with the healthcare system, within childcare and elder care services as well as pointing to an increase in a number of poverty indicators, including child poverty, since 2008.

“The biggest hit has been taken by the poorest,” Dr Healy said adding that the poorest 10 per cent of households - those who have an average gross income of €10,000 - pay just over 30 per cent of their income on direct and indirect taxes.

“I think there is something fundamentally wrong with this and it must be changed,” he said.

He said long-term poverty outcomes needed to be prioritised if these issues were to be addressed adding that this required a focus on medium- and long-term goals and strategies over a 10- or 15-year period as challenges facing society would not be solved within a five-year election term.

Michelle Murphy, research and policy analyst with Social Justice Ireland said long-term investments in social housing, childcare and rural broadband, may not bear fruit for some years, but were “vital...because these decisions will shape the way Ireland looks and functions in the future”.

Social Justice Irleand proposed that an additional €680 million to support the social housing strategy and a €350 million investment in health to support primary care teams with additional measures to support older people, disability and to tackle obesity.

The thinktank and justice advocacy group also proposes a social welfare package including the introduction of a universal pension and a €350 million investment in education including after-school care and early childhood education.

The group proposes the introduction of a minimum effective corporate tax rate of 6 per cent and the extension of the USC levy of 3 per cent to all income in excess of€100,000.

Dr Healy called for an increase of €6.50 per week in social welfare payments although he described the current welfare system as “not fit for purpose” and reiterated the organisation’s call for it to be replaced by a basic income system.