Social housing scheme near Ranelagh set to get green light 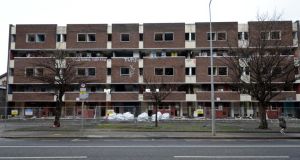 Although beset by delays, Charlemont Street is the only large housing regeneration scheme to survive the collapse of the PPP system in 2008. File photograph: Eric Luke/The Irish Times

The only major public private partnership (PPP) housing deal to survive the property crash will finally go ahead if Dublin city councillors on Monday night approve a regeneration scheme for Charlemont Street flats.

Unlike previous regeneration schemes, the social housing will be “front-loaded”, with 79 apartments to be built for council tenants before any private development takes place.

The council in 2007 advertised for developers to replace the complex of more than 200 flats near Ranelagh in the south inner city.

Most of the complex was built in the late 1950s, apart from one block, Ffrench-Mullan House, designed by Busáras and Abbey Theatre architect Michael Scott and built in 1944.

Alcove Properties, owned by developer Seán Reilly, was the preferred bidder and in 2010 signed a deal with the council to build 260 apartments, 139 of which would be social housing.

Shops, restaurants, a sports centre and about 20,000sq m of office space were to be included in the scheme, which would be built in five blocks ranging up to eight storeys in height.

Following two appeals to An Bord Pleanála, planning permission was granted in April 2013 for an amended scheme which saw height reduced to a maximum of six storeys and a reduction in the number of apartments to 253, as well as some adjustments to the retail and office space.

However, final agreements were not signed with the council and it appeared the development would not go ahead. Then 18 months ago the council took the decision to demolish the old flats, which had been detenanted and had become derelict.

In recent weeks the council has reached a deal with Alcove which will see the regeneration go ahead if it is approved by councillors.

Under the agreement, a block of 79 apartments and a community centre will be completed before any other development takes place.

When more apartments are built, the council will have the option to buy a further 15 units at a 10 per cent discount and 58 more at market price.

Alcove will also pay the council €4,886,286 in exchange for the rest of the site, more than one and a half hectares, not required for social housing.

Although beset by delays, it is the only large housing regeneration scheme to survive the collapse of the PPP system in 2008.

Five large projects, including the demolition and rebuilding of three of the city’s most dilapidated flat complexes, were to have been developed under PPP contracts with developer Bernard McNamara.

The deals with Mr McNamara collapsed in May 2008 following the downturn in the property market.