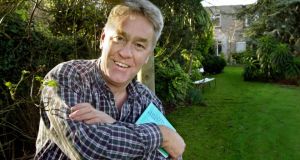 Humanist Association of Ireland director of ceremonies Brian Whiteside said he had been informed by the General Registrar’s Office that it had concerns about people profiting from solemnising non-religious marriage ceremonies. Photograph: Matt Kavanagh

A new law allowing for the legal recognition of non-religious marriage ceremonies is being frustrated by a delay in registering humanist celebrants, it has been claimed.

The Humanist Association of Ireland says it received nearly 600 inquiries in the first three months of this year about facilitating such ceremonies but was unable to meet the demand because only one of its 11 marriage solemnisers had received accreditation from the General Registrar’s Office.

The association’s director of ceremonies, Brian Whiteside, who is the sole registered solemniser, said he had been informed by the Government agency that it had concerns about people profiting from solemnising, and this was why it had not acceded to the other applications.

“But all the other solemnisers – the religious ones – charge in some shape or form,” Mr Whiteside said. “There are costs involved, and I mean you can’t live on fresh air.”

The office, which falls under the Department of Social Protection, has declined to comment on the matter, noting that as a policy it doesn’t give reasons for refusing applications.

Atheist activists
The issue has been complicated by an internal dispute among humanist and atheist activists over provisions within the law which demand that non-religious solemnisers refrain from campaigning for “political cause”.

Some members of the association have joined Atheist Ireland in criticising the law.

“We fought for this law for 10 years and I never thought I’d be in this situation where, on the one hand, I have the registrar general holding things up and, on the other, people who I feel would be friends and colleagues of mine who are trying to scupper this,” said Mr Whiteside.

“I think the non-religious community deserves better. The people I feel sorry for are the people who want to have legal humanist ceremonies but can’t.”

The Civil Registration (Amendment) Act 2012, was enacted last December, allowing secular bodies to legally solemnise weddings. It reaffirms a condition of the original 2004 Act that registered celebrants cannot carry on “a business of solemnising marriage . . . for the purpose of profit or gain”.

Specific conditions
But it adds to this a number of conditions, ruling out the registering of political parties, trade unions or “a body that promotes a political cause”, as well as an organisation that has “the making of profit as one of its principal objects”.

Mr Whiteside said he conducted his first legal marriage ceremony on April 6th. “We did it in a low-key way because there was such confusion, and there still is.” He has done several more weddings since and “I can’t take on anymore. I’m booked up pretty much every weekend this year and into next year.”

The association typically charged €450 for a marriage ceremony, which he said compared favourably with religious alternatives. “What we do is put together a very personal and meaningful humanist ceremony, and I am not charging anything extra for solemnising. I am not profiting from it. We are charging what we always have done [for non-legal ceremonies].”

Regarding the controversy over the legislation’s wording, he said the association had taken legal advice and understood its role in campaigning would not be inhibited. “Our cause is simply the promotion of humanism.”

But Michael Nugent, chair of Atheist Ireland, and also a member of the association, said either the law should be adhered to “or the association should openly challenge the law - and both promote political cause and solemnise marriage; that would be a position based on integrity”.

Wedding day nears - but no celebrant

It’s three months to their wedding day, and Annie Wood and Eddie Quinn still don’t know if the humanist celebrant they’ve booked for the occasion will be registered by then.

“We are all on tenterhooks,” says Annie. “There are couples all over the country like us who are waiting, and don’t know why.

“What I find really bad is we have been given a right by the Dáil and we can’t exercise this right.”

The bride- and groom-to-be, both aged in their early 60s, are opting for a non-religious ceremony to be held in the garden of their home near Mitchelstown, Co Cork. “Ed and I are not humanists per se but our philosophy would be about connecting with nature, the universe and mankind, more of a Quaker philosophy. We are not anti-religion. We’re not anti-anything,” Annie explains.

The couple said they started planning the wedding after the legislation went through last December allowing for secular marriage solemnisers. They looked up non-religious celebrants on the internet, stumbled across the Humanist Association of Ireland website and located its representative in Co Cork, Norma McElligott.

“We were delighted in December when registered humanists were being allowed to conduct ceremonies, but our celebrant has not been approved yet. She is in limbo - and so are we.”

As a back-up plan, they have booked an advance appointment at the registry office where they would be married ahead of the service.

“What we wanted was for the legal part to happen at the same time as the service, the same as in religious ceremonies. That’s what we are entitled to under the law. But now we may have to do the legal part first and then go to the garden; if we do that no one will be with us in the registry office.”

Both she and her fiance had Catholic upbringings. Belfast-born Eddie, who is a widower, says: “We just want freedom of choice.”

The couple have written their own vows for the ceremony, which will include music (“from punk to classical”), readings and poetry, with plenty of guest participation.

Friends and family members are travelling from England and Northern Ireland for the occasion, “even the very religious ones”, Eddie laughs.