Senator criticises lack of female politicians in favour of No vote 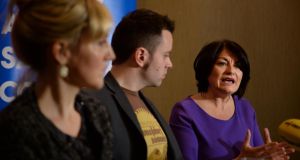 Independent Senator Fidelma Healy Eames has said the lack of female politicians coming out in favour of a No vote in the forthcoming same-sex marriage referendum is “political correctness gone mad”.

Speaking at a final press conference held by the Mothers and Fathers Matter group, she said it was impossible to separate the issue of children from the referendum at hand and that more time was needed for debate.

She said she was the only female member of the Oireachtas who had come out in support of a No vote, when at least 25 to 30 per cent of the public are intent on voting against the amendment.

“Something is wrong. This, I think at some level, is political correctness gone mad. It’s populism but it certainly isn’t thought through,” she said.

The Galway senator also expressed her concerns over the effect a Yes vote could have in the area of education, in which she has more than 20 years experience.

“Is it appropriate to expose children as young as four and five to this type of language and behaviour? I don’t know. I don’t think so.”

The press conference was also addressed by the group’s spokeswoman Eileen King and Tom Finegan.

The trio said it had not been the intention of the No side to put children at the centre of the debate, but the Government had made this unavoidable by choosing to propose an amendment to Article 41 of the Constitution, dealing with marriage and the family, rather than to Article 40, which deals with equality.

They said there had been no Green or White Paper on the subject, no proper debate and that the Government had been “deliberately evasive” on the relevance of children to the issue.

They said a rejection of the referendum, as it has been put forward, would be a welcome outcome, and would allow time to reframe Constitutional rights for same-sex couples.

“Let me tell you, if I thought a child of mine was not being treated equally I would move heaven and earth to try and fix that,” Ms Healy Eames said.

“If this was a referendum about whether we love and cherish our gay children and deem them equal I would vote yes with all my heart.

Tom Finegan said claims by the Yes side that the referendum had nothing to do with children were “remarkable” and “risible”, given the effects a Yes vote might have.

Addressing comments made in recent days by Mr Justice Kevin Cross, the Referendum Commission chairman, Mr Finegan said: “When asked directly on the Constitutional rather than the statutory effects of an amended Article 41, he said that it would be, quote unquote, difficult to imagine how a future Oireachtas could give a stated preference in law for a child to have a mother and father.

“He made those remarks particularly in the context of surrogacy, but they would apply logically to the issues of adoption law and donor assisted human reproduction law as well.”

Mr Finegan said that there was an important distinction between Constitutional and statutory law.

“No person other than an Oireachtas member has any direct say on statute law. What we are being asked to do on Friday as the electorate is to amend the Constitution and that will have Constitutional effects.

“And that will decide to what extent the Oireachtas may or may not decide how to regulate or form laws in relation to adoption, surrogacy and donor assisted reproduction.”