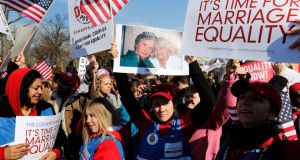 Protesters rally against the Defense of Marriage Act in front of the US Supreme Court in Washington this week. Photograph: Jonathan Ernst/Reuters

The cover of the current issue of Time magazine sums up the extraordinary situation that is playing out this week in the US: “Gay Marriage Already Won; The Supreme Court hasn’t made up its mind – but America has.”

The article notes that “like a dam that springs a little leak that turns into a trickle and then bursts into a flood, the wall of public opinion is crumbling”.

In Ireland, there has been a similar extraordinary transformation in the status of lesbian and gay people, from almost complete marginalisation to a short step to constitutional equality. This day 20 years ago, gay people were still criminalised in this country. It was not until June 1993 that criminal status was abolished by the Oireachtas. Since then, powerful equality legislation has been introduced, giving significant protection to lesbian and gay people and other groups vulnerable to discrimination. In fact, Ireland was one of the first countries in the world to introduce such comprehensive equality legislation and provided a model for the rest of the European Union.

In June 2010, the Dáil unanimously passed a marriage-like Civil Partnership Act and this Government, and the Minister for Justice and Equality in particular, are committed to introducing comprehensive parenting reforms for lesbian and gay families. Now there are strong moves towards civil marriage reflected in public opinion and the support of almost all political parties. The constitutional convention will consider equal marriage at its next meeting on April 13th and 14th.

This rapid change in the status of lesbians and gay men here is mirrored in other, once inhospitable countries, such as the US. There, too, there has been a sea-change. A decade ago, only 27 per cent supported equal marriage; now there is a clear majority for equality. In previous decades, issues of progress for gay people were flash points in the often bitter “culture wars” between the liberal left and the right. Now even the right is moving to support equal marriage, with the Republicans making moves to drop opposition.

Most dramatically, US president Barack Obama, who supports equal marriage, won the recent election and broke new ground when he said: “Our journey is not complete until our gay brothers and sisters are treated like anyone else under the law, for if we are truly created equal, then surely the love we commit to one another must be equal as well.”


Stonewall protests
Of course the old joke about “overnight success” taking decades comes to mind. The modern gay rights movement began with the famous Stonewall demonstrations in New York when gay people fought back for the first time against police harassment and violence. This new movement led to the setting up of the Irish Gay Rights Movement in 1974. Progress was slow. There were huge pressures on gay people to stay secret “in the closet”, not to openly campaign. Many chose to emigrate to get some sense of freedom; our allies were few and opponents were powerful and dogged in resisting change.

Violence and harassment were all too frequent and the responses of the police and judiciary were often found wanting. The most infamous case seemingly condoned by the courts resulted in Ireland’s Stonewall, the “Fairview March”. A young man walking through Fairview Park was beaten to death by a gang of youths. In 1983, these men were given suspended sentences, freed immediately and subsequently held a “victory march” in the park.

There was a public outcry and the Dublin Lesbian and Gay Collective organised a march to Fairview Park. It was to be a defiant public statement that gay people would no longer be frightened off the streets and out of public spaces. The banner on the march said simply, “Stop Violence against Gays and Women”.


Difficult 1980s
The 1980s was a tough time to be lesbian or gay in Ireland. For example, it saw the onset of the HIV/Aids crisis and it was Gay Health Action who had to give leadership to government and the medical authorities to get them to take the necessary action. This crisis led to the development of a renewed activism, both in the US and here, that is now coming to fruition.

Meanwhile, we were still criminalised. Change was strongly resisted by religious and political forces and it took a significant campaign through the courts and by gay groups and others to achieve reform. Finally, in June 1993, the Oireachtas passed a law abolishing criminalisation. As a leaked government memo published in The Irish Times stated, it “would in effect equate, for the purposes of the law, homosexual and heterosexual behaviour”.

The long-delayed law reform was greeted enthusiastically by all sides of the Oireachtas and described as “one of the historic events of the decade”, “a great day for Ireland” and “truly liberating”.

The way we campaign and debate must mirror the type of society we want to live in: tolerant, open and respectful. As the Irish Council for Civil Liberties said of Chris Robson, co-founder of the Gay and Lesbian Equality Network (Glen) and one of the principal campaigners for these changes, who sadly died this week, “Chris had a deep and genuine commitment to human rights, which played itself out in the integrity and decency of his relations with others, including those with whom he profoundly disagreed”.

From being a “cold house” for lesbians and gay men in 1993, Ireland is now one of the most accepting and inclusive countries in the world. Very many people contributed to this transformation, but most important are the thousands of lesbians and gay men who have come out in their everyday lives to their family, friends, work colleagues and communities.

The same pattern holds in the US and elsewhere. As legal protections increase, more lesbian and gay people are open about their lives, from young people in schools to those in old age, which creates a powerful platform for further reforms.


Holding hands
Of course we have a good way to go yet. The legal issues around parenting and the rights of children must be resolved. Equal marriage and full constitutional equality must be achieved. These necessary changes are occurring rapidly on both sides of the Atlantic. Equality in ordinary everyday lives is the end goal. We want a society where being lesbian or gay is unremarkable at any stage.

When you see lesbian or gay couples walking down the street holding hands and it does not particularly surprise you, you will know we have arrived.

Kieran Rose is chairman of Glen, the Gay and Lesbian Equality Network