Wrong on the women question, but Pope Francis is a clear voice for decency

Opinion: Pontiff’s declaration that he is a sinner is not merely an affectation 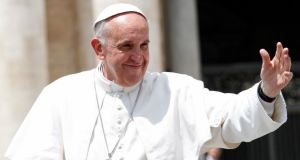 Pope Francis: spoke movingly about his parents and his grandmother. Photograph: Reuters

The election of Jorge Mario Bergoglio as pope and head of the Catholic Church on March 13th this year seemed unprepossessing.

Along with all the appointees of Pope John Paul II, he toed the line on homosexuality, abortion, contraception, divorce, married priests and, of course, the ordination of women. There were early signs in his pontificate that he might be different from his predecessors in style. He reportedly refused to wear the sumptuous papal cape for his appearance on the balcony at St Peter’s Basilica on his election and made phone calls personally to “ordinary” people. He refused to live in the lavishly-decorated papal apartment, insisting on one of the guest houses where he dines with others who happen to be staying there.

But the orthodoxy seemed to persist. He reiterated a rebuke to the US Religious Conference of Women Religious, previously issued by his predecessor Benedict XVI: the sisters were tinged with feminist influences, focused on ending social and economic injustices and not sufficiently on abortion.

But then there was the interview, published last week, in Jesuit magazines globally, where he revealed himself as self-questioning, self-critical, sceptical of “certainties” , open to contradiction and deeply influenced by western elite culture: art, classical music, poetry, literature, typical influences of an upper middle-class upbringing.

Jorge Mario Bergoglio is different and more interesting than some of us thought.

Asked who is Jorge Mario Bergoglio, he appeared surprised by the question. He thought about it and replied: “I am a sinner. This is the most accurate definition. It is not a figure of speech, a literary genre. I am a sinner.”

This frank acknowledgement of his inadequacy is almost startling and unusual for anybody. If a pope ever said it previously, it would be hard to believe it was not an affectation but here, it seems, it is not.

There is something convincing too about what he said his feelings were on being elected pope. He said that on visits to Rome he had visited the church of St Louis of France, where there is a painting by Caravaggio, The Calling of St Matthew, which depicts a story from the Gospel of Matthew: “Jesus saw a man named Matthew at his seat in the custom house, and said to him, ‘Follow me’, and Matthew rose and followed Him.” Matthew was a tax collector and is shown with four other men, gathering money, and Jesus pointing at him. Pope Francis said he felt like how Matthew is depicted, as feeling a sense of resignation and awe.

Throughout the interview he speaks about community and how he himself has a sense of loss without it. When speaking about infallibility, he speaks in terms of the Christian community being infallible (“all the faithful considered as a whole, are infallible in matters of belief”). That strong sense of community is so much at variance with the ethos of our time in which people are seen as individuals, pared off from society, pursuing individual agendas and interests. He says at one point: “I cannot live my life without others.”

Stirring stuff
He says at another: “No one is saved alone, as an isolated individual, but God attracts us looking at the complex web of relationships that take place in the human community. God enters this dynamic, this participation in the web of human relationships.”

Even for those of us among the “faithless”, this is stirring stuff, challenging the “common sense” of our time.

Pope Francis speaks movingly about his mother and father and particularly of his grandmother, Rosa, “who loved me so much”. He speaks of the Catholic Church which, “sometimes has locked itself up in small things” and later: “We cannot insist only on issues related to abortion, gay marriage, and the use of contraceptive methods.”

There are dark passages too. He talks of “female machismo” in a dismissive reference to feminism: “A woman has a different make-up to a man.” He should be encouraged to read Judith Butler’s Gender Trouble.

This is followed by blather on a new theology of women, diverting attention from the scandal of the church’s promotion in its ceremonies, organisation and culture of the supposed inferiority of women.

But that aside, this is a welcome clear and honest voice for decency.