Why this new trend to canonise popes? 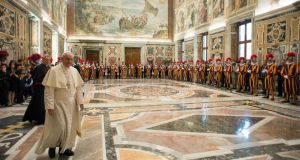 Pope Francis at the Vatican yesterday. Of the last eight popes, seven are at different stages on the road to sainthood. Photograph: Osservatore Romano/Reuters

The papalisation of canonisations is a modern phenomenon. Of the 265 deceased popes to date only 78 have been canonised with most of those being martyred in the early centuries of the church.

This modern trend began in 1954 when Pope Pius X11 declared one of his predecessors, Pius X, a saint, the first pope in 400 years to be given this recognition. Since then of the last eight popes, seven are at different stages on the road to sainthood. Even Pope John Paul I, pope for just 33 days, is on the first rung of the ladder to sainthood. There are four official stages in the canonisation process. It begins when one is locally declared a servant of God. Then the process moves to Rome where the suitable candidate may become venerable. The final two stages of blessed and sainthood demand the existence of “miracles” .

Holiest men
This movement towards the canonisation of modern popes seems to be a conscious strategy to reinforce the central power of the papacy by placing them as the holiest men in Christianity to whom the faithful can pray for special favours. Churches can then be dedicated to them. Icons with their images enhanced by haloes can be minted and their remains, having being disinterred, are honoured as official relics. This process further enhances the “infallibility” of the papacy where one pope exercises his infallible powers to declare that one of his predecessors is enjoying the glory of heaven.

It is significant that Pope Pius IX, who called the First Vatican Council in 1869 and which declared the infallibility of the pope as a dogma of the church, was declared blessed by Pope John Paul II in 2000 and is awaiting just one more miracle for sainthood.

Another factor which has reinforced this papalisation of the canonisation process were the rule changes introduced by Pope John Paul II in 1983.

Before then a lapse of 50 years was necessary from the death of a potential saint before the process of canonisation begun. This ensured a certain objectivity prevailed and eliminated the demands for the immediate sainthood of a popular person. Pope John Paul II reduced this time limit to five years . Most significant of all he abolished the so-called “Devil’s Advocate” whose duty was to argue against the person’s elevation to sainthood so that it became less an adversarial trial and more of a documentary process.

These canonical changes allowed Pope John Paul II to be canonised in record time with no Devil’s Advocate to argue against his inaction regarding clerical sex abuse and his public support for the sex abuser Fr Marcial Maciel , founder of the Legionaries of Christ.

Superior in ‘holiness’
This is not to infer that any of these popes were not good people, except to question why popes of their very nature are automatically superior in “holiness” than the rest of us.

While the liturgical pageant involved in the canonisation ceremony can be uplifting this emphasis on papal sainthood deflects attention away from the serious problems of lack of accountability, proper governance and clericalism within the church. The glittering pomp and glory of the medieval church with cardinals parading themselves as princes of the church returned last Sunday week.

It is a far cry from the church of the majority of the people of God who live in destitution, marginalisation and poverty – a church espoused by Pope Francis.

He has an uphill struggle to effect radical change in the church .