Opinion: Religion now being accepted as normal in a society that was once very intolerant of difference 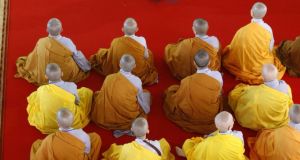 Buddhist monks attend the blessing, by the Dalai Lama, of a new Buddhist temple in Paris. Photograph: Reuters

Five years ago I was asked to write a chapter about the Buddhist community for a book on Ireland’s different religions. The book never materialised, but it prompted research into when Buddhism first arrived in Ireland.

I had assumed the answer lay in the 1960s or 1970s, but instead I found that the first Buddhists appeared in the 1871 census – and the first definite knowledge of Buddhism was in the sixth or seventh century.

In the meantime medieval diplomats, early modern sailors’ tales and letters from 16th and 17th century Jesuits all added to Irish knowledge. The British empire brought many Irish people to Buddhist Asia, and knowledge filtered back to Irish popular and educated culture – as well as the first converts and the first Asian Buddhist immigrants.

The story many of us have been told about “traditional” Ireland’s isolation from the wider world says more about the 1950s than the 1850s.

In pre-independence Ireland, Buddhism was a symbol of human difference, a religion older than Christianity and now coming very close to home – in racehorse names and advertising quotes, movies and novels, exhibitions and university courses.

Molly Bloom’s soliloquy immortalises a Burmese Buddha statue that once stood in the National Museum entrance; but by the time Ulysses was written, Irish writers and artists had been playing with Buddhist culture for a century.


Cultural diversity
Then as now, religion was a way in which Irish people could understand and respond to the fact of cultural diversity and global connections – whether welcoming or hostile.

The flow went in both directions. In 1900, for example, a Booterstown-born beachcomber in Rangoon became the Buddhist monk U Dhammaloka and went on to play an important role in the anti-colonial Buddhist revival that contributed to the end of empires in Asia – and created the new forms of modern Buddhism which have since been exported to the West.

With other researchers, I have been pursuing stories such as Dhammaloka’s in a five-year research project, since published as Buddhism and Ireland. We have drawn on newspaper archives, digitised texts, census data, interviews with Irish Buddhists, information from the public and generous assistance from specialists, leading to stories like the Irish Franciscan who travelled to China in the 14th century and the pioneer transsexual who became a Tibetan monk in 1960.


Meditation
Buddhism in Ireland today means many things. At its core are those who consciously identify as Buddhist – with, perhaps, a regular meditation practice and a formal affiliation to a particular tradition.

Some have a centre or group in Ireland; others practise with a teacher abroad. With a few exceptions, migrants “born Buddhist” do not yet have their own institutions here, though this is changing.

Many more Irish people “have a connection” with Buddhism: following a practice, reading books or interested in Asian Buddhist cultures and art. Often such people are keen not to reproduce their experience of organised religion, and consciously resist categorisation.

Beyond these again are the large numbers of Irish people who draw on Buddhism in unacknowledged ways. Buddhist meditation has been widely adopted by Christian groups and individuals, and in secular forms such as mindfulness training.

In these ways, Buddhism is making a real if subtle contribution to Irish society. Perhaps its most remarkable achievement is its increasing respectability and normality in what until very recently was a society marked by deep religious intolerance.

The story of Buddhism’s coming to the West is also the story of Ireland’s learning to live with different lifestyles, cultures and forms of belonging – and it is all the more important for that.

Additional note: According to the 2011 census the population of Buddhists in Ireland is 8,703, making it the fourth-largest religion in the Republic after Christianity, Islam and Hinduism.


Laurence Cox directs the MA in community education, equality and social activism at NUI Maynooth. Buddhism and Ireland (Equinox) is published in paperback and hardback.