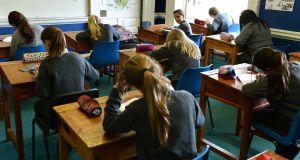 The Bishop of Ossory Séamus Freeman welcomed the announcement by Minister for Education Jan O’ Sullivan that her Department had agreed to build the new schools.

Ireland’s oldest Catholic secondary school, St Kieran’s College Kilkenny, has provided a site to a non-denominational patron for two new schools in the city. The site has been handed over by St Kieran’s to the Department of Education and Skills.

The schools on the new campus, to be run by the Kilkenny and Carlow Education and Training Board, will include Kilkenny Vocational School, which has been on the St Kieran’s campus since 1979, in a new Community College and, in a separate premises, Coláiste Pobal Osraí established in 1991. Both will accommodate an estimated 350 second level pupils.

In 2013 Kilkenny Carlow Vocational Education Committes merged to form the Kilkenny and Carlow Education and Training Board.

The patron of St Kieran’s and Bishop of Ossory Séamus Freeman welcomed the announcement by Minister for Education Jan O’ Sullivan that her Department had agreed “to invest significantly further in second-level education in Kilkenny.”

Facilitating the announcement through providing a site would, Bishop Freeman said, “further guarantee a greater educational choice for parents and students in the surrounding area”.

He added that “the Catholic Church is very much committed to Catholic education. However, we must continue to recognise the importance for all involved, teachers, parents, students, by encouraging and supporting other educational models”.

St Kieran’s, an all boys school, has 750 pupils and “was oversubscribed by 90 this year,” its president Fr Dermot Ryan noted.