Opinion: Ireland is highly unusual in still having a constitutional prohibition on blasphemy 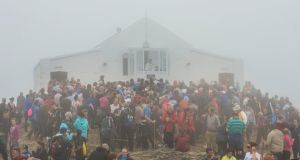 ‘This weekend, the Archbishop of Tuam Michael Neary had some provocative things to say during Mass at Croagh Patrick’s summit.’ Photograph: Michael Mc Laughlin

A news report on The Irish Times website on Sunday from the annual pilgrimage to Croagh Patrick offered readers some useful historical background from the fifth century. “At the end of his fast St Patrick threw a silver bell down the side of the mountain which knocked she-demon Corra from the sky into a lake at its base.”

For a lifelong agnostic, this was a useful fact to know and it seemed churlish to ask for corroboration. As a rule, we non-believers prefer to live and let live. Other people’s faith is their own business.

However, it’s clear that some people of faith feel under threat. This weekend, the Archbishop of Tuam Michael Neary had some provocative things to say during Mass on Croagh Patrick’s summit.

“Anyone who dishonours the faith of Israel, its image of God or its great figures must pay a fine,” the archbishop told pilgrims. “The same is true for anyone who insults the Koran and the convictions of Islam. But when it comes to Jesus Christ and that which is sacred to Christians there seems to be a different standard; freedom of expression knows no limits.”

This is an interesting interpretation of the current law on such matters, albeit one entirely unsupported by fact. As it happens, Ireland is highly unusual in still having a constitutional prohibition on blasphemy, which has been bolstered since 2009 by legislation. There is no distinction made in that constitutional or legislative wording between “the faith of Israel”, the “convictions of Islam” or Christianity. Nor is there any similar protection for those of us who don’t subscribe to any religious belief system (not that I’d want it).

When the constitutional convention considered this issue last November, it received submissions, including that from the Irish Council of Churches, a coalition of the main Christian churches in Ireland, which described the constitutional prohibition on blasphemy as “largely obsolete”. The convention members voted to replace it with a prohibition of “incitement to religious hatred”; and also voted against having a statutory prohibition of blasphemy. Whether the Government will pay heed remains to be seen. It’s worth noting that it was the presence of issues such as this on the convention’s agenda which caused it to be dismissed in some quarters as an irrelevance.

As a rule, such issues tend to elicit a big yawn from the population at large. For reasons which have been exhaustively dissected to the point of tedium elsewhere, Ireland never experienced the strong anti-clericalist political movements which played such a large role in the modern history of most other predominantly Catholic countries. As a result, for the most part, the people of Ireland have made their own accommodations with the country’s rather peculiar (in an international context) non-separation of Church and State. So Bouncy Castle Catholics put their kids through First Communion without trying to pretend they believe it, and most non-Catholics accept the Father Ted-isms of the televised Angelus as one of those oddities, like red lemonade, that make us what we are. Only oddballs and fanatics, surely, would want to sweep all this away?

Apparently not, according to Archbishop Neary. In his sermon, he said: “We have become accustomed to Christianity being marginalised in the public domain, instanced by the banning of Christian symbols in certain quarters.” Really? To what is he referring? And to whom is he referring when he says attempts are being made “to reshape the values of the Irish people in ways that are fundamentally opposed to the gospel”.

So, if we are to believe the archbishop, this movement’s aims include the privileging of other religions (usually associated with immigrants) above Christianity, along with the banning of Christian symbols in public, all in pursuit of a specifically anti-Christian objective. This is a fairly noxious characterisation of the motives of people with whom one might disagree

Is it possible that Archbishop Neary’s sermon was informed by his role in the recent international furore surrounding the deaths of children at the Tuam mother-and-baby home? It’s hard to believe his words weren’t to some degree at least influenced by his experience earlier this summer when he found himself at the centre of a media storm which exemplified how culture war polemics can degenerate into vulgar abuse and oversimplification.

But perhaps he should consider whether it was the very closeness between Church and State (aided and abetted by a compliant, deferential society) which led to Tuam and other crimes and conspiracies. Maybe committed Christians would be better served by a complete separation between the two and a recognition that the beliefs they hold deserve the very same level of respect and recognition as those held by the rest of us. No more. No less.