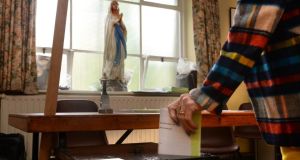 ACP co-founder Fr Tony Flannery said “the day of doctrinaire Catholicism is over in this country. The people are no longer willing to listen to speeches and sermons on morality from the church.” Photograph: Cyril Byrne/The Irish Times

The Same-sex Marriage Referendum was “an unmitigated disaster” for the Catholic Church in Ireland, Fr Brendan Hoban, co-founder of the Association of Catholic Priests (ACP), has said.

“It was clear from the beginning that the bishops’ decision in policy terms to campaign for a blunt No vote was alienating even the most conservative of Irish Catholics,” he said.

The referendum result illustrated “the gap between the church and a significant number of its people... It is so out of tune with the needs of the people,” he said.

It was “another significant body-blow to the position of the Catholic Church in Ireland” and “a watershed in Irish history”.

Another ACP co-founder, Fr Tony Flannery, said “the day of doctrinaire Catholicism is over in this country. The people are no longer willing to listen to speeches and sermons on morality from the church.”

What was “ particularly sad was to see the bishops in total opposition to a mass movement of the younger generation”.

“The very people whom the church should be trying to listen to, and trying to learn a way of communicating effectively with, were the ones they were driving further away with all their pastorals in each diocese,” he said.

He also felt Archbishop of Dublin Diarmuid Martin “allowed himself to be bullied by the extreme conservative Catholic papers into adopting the same rigid line as the other bishops”.

“It was obvious that he was uncomfortable with it, but to me he showed great weakness in not standing up for what he really believed.”

Fr Seamus Ahearne, a member of the ACP leadership team, said “the church has faded from the consciousness of the population. It is no longer important what church people say.

“The church is very old. Those who attend are very old. It is most likely that the young ones who voted are not churchgoers generally. That is neither a fault or a problem but a reality.”

Another member of the ACP leadership team, Fr Gerry O’Connor said “the result went as I expected. I really see it as legislation catching up with people’s lives.” He felt “the Irish people should be proud”.

The church needed to grow in its maturity and understand it is one among others, and cannot expect its teaching to be reflected in the law of the land, he said. It needs to adapt to the new context, “as it has done in other countries”.

Augustinian priest Fr Iggy O’Donovan said one positive was that “of all the moral referendums we’ve had it was the most reasoned, with pretty civilised debates”.

He thought “the intervention of Mary McAleese, as a mother with a gay son, a top civil lawyer and a very popular ex-president, struck a chord”.

The church “has to realise ordinary people are not listening to us any more”, he said.

He was “absolutely delighted” with the referendum result.

Founded in 2010, the ACP’s membership includes a third of Ireland’s Catholic priests.