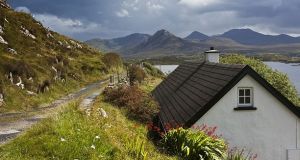 The site, which is also associated with the pagan Lughnasa Solstice festivals, features a holy well and a Mass Rock. Above: Rural landscape in Connemara showing the Maumturk mountain range in the distance. Photograph: Michelle McCarron/Getty

A pilgrimage dating back to the 5th century will take place in the Maamturk mountains in north Connemara this weekend.

Several hundred pilgrims from all parts of Ireland, are expected to participate in the Máméan walk to the shrine at St Patrick’s Well-Bed on the 1,000-foot mountain which is located between Recess and Maam Valley.

The site, which is also associated with the pagan Lughnasa Solstice festivals, features a holy well and a Mass Rock (Carraig an Aifrinn) which was used during the repressive penal times when isolated locations were used to host religious ceremonies.

Retired professor of sociology at NUI Maynooth, Fr Micheál MacGréil SJ, revived the pilgrimage in 1979 and in the intervening years has overseen the building of a small chapel (Cillín Phádraig) near Leaba Phádraig, the rock where St Patrick is reputed to have slept and from which he gave Connemara his blessing.

The pilgrimage starts at 9am. Confessions will be heard and the traditional Stations of the Cross will be at 3pm. Caoineadh na dTrí Muire will be sung in the sean-nós style by Máire Anna Uí Chadhain and Roundstone parish priest Fr Francis Mitchell will celebrate Mass at 4pm.

The theme of this year’s pilgrimage is Mercy/Trócaire. There is a car park at the foot of the mountain. The climb takes up to 45 minutes, depending on levels of fitness.