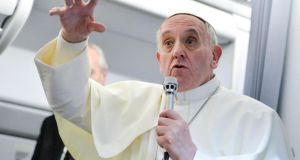 Pope Francis talks with journalists as he flies back to Rome after his visit to Brazil on July 29th. Photograph: Reuters

In a wide-ranging 80-minute conversation with journalists on the aircraft that brought him back to Rome from a week-long visit to Rio de Janeiro for World Youth Day, the pope said: “If a person is gay and seeks God and has good will, who am I to judge him?”

He continued: “The catechism of the Catholic Church explains this very well. It says they should not be marginalised because of this (orientation) but that they must be integrated into society.”

He added: “The problem is not having this orientation. We must be brothers.”

The GCVI group said in a statement it welcomed what the pope said, for two reasons.

“Firstly the pope’s comments accept the existence of gay people as a recognisable part of the Catholic Church community for the first time. This is a significant development from previous papal pronouncements, which have usually referred to a ‘homosexual condition’ rather than a group of people within the church who are gay.”

The group also welcomed the pope’s comments “because we believe that it is a small but important step towards undermining the spurious religious legitimacy used to underpin homophobic violence against LGBT people”.

The group continued: “Pope Francis’s comment ‘Who I am to judge?’ in reference to gay people helps to take away the religious cloak of legitimacy from groups who seek to judge and condemn gay people for no other reason than that they are gay.

“While such judgments and condemnations are still made in Ireland, they are made to a far greater degree in other countries around the world where gay people continue to suffer harsh discrimination because of their sexual orientation. We welcome Pope Francis’s comments as a helpful contribution in this struggle.”