‘Demand for other forms of patronage is growing... process of diversification still too slow’ 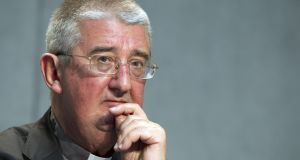 Archbishop of Dublin Diarmuid Martin: “The demand for Catholic schools is strong. The demand for other forms of patronage is growing. The process of diversification is still too slow.” File photograph: Andrew Medichini/AP Photo

Providing choice in Irish schools is taking too long, the Catholic Archbishop of Dublin Diarmuid Martin has said.

“The demand for Catholic schools is strong. The demand for other forms of patronage is growing. The process of diversification is still too slow,” he said.

“We live in an era of change. It is no time for believers to sit and bemoan or to be sidelined into the irrelevant. Believers must regain confidence and courage to face new things in new ways.

“It is time for tolerance and respect for diversities. It is time for a church to be present in society in such a way as to help people find that God is revealed in Jesus Christ, not as an imposition but as an invitation to fullness of life,” he said.

The debate on patronage “can be polarised and can ideologically polarise society. A pluralist society has every day to learn what being pluralist means and how we communicate while maintaining the language of our dearly felt values,” he added.

A sense of common purpose

“In the educational sphere, pluralism means also ensuring that ideologies are laid to the side for the moment while a sense of common purpose emerges to respond to the urgent needs of the poorest and most disadvantaged,” he said.

Speaking at a Mass to mark the beginning of the school year in Clonliffe College today, he said “educational policy must always have within it a priority option for the poor”.

The disadvantaged “must always be given pride of place in policy-making and allocation of funds. We have to address more effectively the needs of the members of the Travelling Community, where all the indications are that they persistently remain among the most disadvantaged educationally,” he said.

Addressing “in a special way” the Catholic education community, he said: “Catholic schools have played and continue to play a vital role in the educational context of this country, and will continue to do so in the future. They will do so in the future in a different overall cultural climate which respects the rights of all parents to choose a school which represents their values.”

“Faith cannot be imposed. Faith education is about an openness to come and see, to seek, to learn,” he said.

In Ireland, faith has “to move forward from an abstract dogmatic catechesis” while “Ireland also needs to overcome the intolerance of religion which can be found at times in an intransigent secularism”.

Belfast councillors back investigation into Storey funeral 18:21
Coronavirus: One death, 25 new cases reported in State 18:11
Children who go abroad must self-isolate for 14 days before return to school in September 18:10
Angry Taoiseach calls for resumption of work on new National Children’s Hospital 17:56
Man tried to steal cars while high on crack and holding chihuahua 17:51