Defects found in sport are integral to wider society 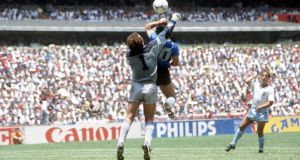 “Maradona would not have used ‘the hand of God’ to score perhaps the most infamous goal in World Cup history if he was not born into a culture where Faustian pacts with the devil were an everyday occurrence.” Photograph: Bob Thomas/Getty Images

It is that time of year again when GAA fans quiver with excitement as the Championship begins. 2013 witnessed almost unrivalled excitement in hurling.

For many Gaelic football fans though, one of the abiding memories of the year will be Joe Brolly’s incendiary comments about the Tyrone team and star player Seán Cavanagh, after their controversial victory over Monaghan in the All-Ireland quarter-final.

Coming at a time when athletics was beset by yet another series of drug scandals and Lance Armstrong continued to cast a long shadow over cycling, Brolly’s remarks raise wider questions about whether a win-at-all-cost mentality exists in sport today and indeed the larger issue of ethics and sport.

The extensive reflection about alcohol sponsorship of sporting events over the last year adds another layer to the debate.

The former president of the GAA, Dr Mick Loftus, has been a persistent critic of this position. He famously announced that he would not attend an All-Ireland hurling final until the Guinness sponsorship of the hurling championship ended. Rugby too has relied heavily on sponsorship from drink companies.

Sponsorship always raises potential ethical questions. Is it appropriate, for example that crime programmes are sponsored by insurance companies which may have a vested interest in hyping people’s fears about crime? However, there are particular ethical issues involved in sponsorship raised by alcohol companies.


Alcohol consumption
No drug has caused more damage to Irish families than alcohol. Of course, the Guinness sponsorship of the hurling championship did not force young people to drink alcohol. Yet it would be naive in the extreme to think that executives of alcohol companies would fork out huge sums of money on sports sponsorship unless there was some boost to their sales in return.

Sport is a microcosm of society. If our language is part of who we are, our sports actually tell us who we are. When we know the way winners and losers are treated in sport and the way rules are enforced, then we know a great deal about the larger society in which it exists.

The defects we find in sport: cheating, violence and drug abuse are an integral part of wider society. Maradona would not have used “the hand of God” to score perhaps the most infamous goal in World Cup history if he was not born into a culture where Faustian pacts with the devil were an everyday occurrence.

Increasingly, sport is becoming identified with the culture of the survival of the fittest. This involves subordinating everything else in sport to winning. This approach was encapsulated in the popular saying attributed to the famous American coach Vince Lombardi: “Winning isn’t all-important, it’s the only thing.”

In recent years, Irish society has had many nasty reminders of the ghosts of our past,such as the unbearable horrors of child abuse in institutions run by church and State.

Sport does give power to a number of people such as managers and mentors.

Generally this power is exercised very responsibly and a huge number of people heroically volunteer their time to help others develop their potential. However, as in all walks of life, power brings the potential for abuse.

Tragically, a small minority of our top swimming coaches did abuse their power in the recent past – and the damage to the young people involved will be felt for decades to come. Sadly, in the last two years, there have also been high-profile allegations of abuse in one of the country’s most prominent GAA clubs.

A core ethical principle is: first do no harm. While Irish sporting bodies, to their credit, have done much in the area of child protection in recent years, there is no room for complacency in this area.


Noble ideal
Sport is a parable of what life at its innocent best can be. Sadly many people do not always experience it in that way. To take one example, Jason Sherlock has courageously spoken in public about the racism he experienced while playing for Dublin. Our ethical challenge is to recapture the purity of sport and hand that on to the next generation.