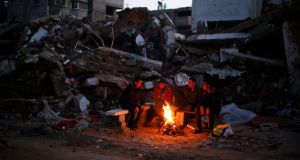 Palestinians warm themselves by a fire near the ruins of houses which witnesses said were destroyed by Israeli shelling in Gaza City December. Photograph: Mohammed Salem/Reuters

The Church of Ireland united dioceses of Dublin and Glendalough aim to raise €150,000 for the Al Ahli Hospital in Gaza City over the Christmas period.

Families throughout the dioceses are being urged to include an imaginary Gaza guest in their festive gatherings this year to help raise funds for the appeal.

They can contribute by donating the cost of the meal for their Gaza guest and the price of a gift for a loved one.

In the emergency non-political appeal Archbishop Michael Jackson encouraged people in the united dioceses 59 parishes to “please lay a place at your table for someone, just like any of us, as a way of supporting friends abroad and contributing to the reconstruction of the Al Ahli Hospital which itself turns nobody away”.

Parishes, schools, hospitals, organisations and individuals throughout Dublin and Glendalough can also get involved by holding an Advent fundraising event for the Gaza hospital.

The appeal is being run as part of a longer term link which is being nurtured between Dublin and Glendalough, and the Diocese of Jerusalem which owns and controls the Al Ahli Hospital.

The funds raised will be used to improve its facilities for on-call staff and to install solar panels to ensure a more secure electricity supply for the hospital.