Charles Pfoundes first to bring Buddhism to the West 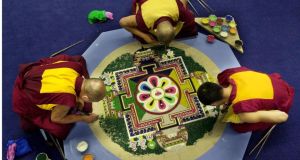 Tibetan Monks construct a sand Mandala of the Buddha of Compassion at the Chester Beatty Library. Photograph: The Irish Times

Buddhism focuses on personal spiritual development and the attainment of enlightenment through the practice and development of morality and meditation. The Buddha, Siddhartha Gautama, was born in present-day Nepal more than 2,500 years ago.

Pfoundes, born Charles James William Pounds in 1840 in or near Waterford city, is believed to be the earliest Irish Japanologist of note. His studies in Japan predated those of Irish/Greek scholar Lafcadio Hearn by more than 20 years.

Dr Laurence Cox of Maynooth University, Prof Brian Bocking of UCC and Prof Yoshinga Shin’ichi of Maizuru National College of Technology in Japan have found that in 1889 Pfoundes became the official London representative of the Japanese Buddhist Propagation Society.

Pfoundes emigrated to Australia aged 14 and travelled widely before arriving in Japan. He became fascinated by Japanese customs and culture, was soon fluent in the language and changed his name to Pfoundes, reflecting the Japanese spelling of Pounds.

He was in London from 1879 to 1893, when he returned to Japan. He died there on December 2nd, 1907, in Kobe city. Today Prof Yoshinaga and Dr Cox will visit Pfoundes’ grave in Kobe’s foreigners’ quarter.