Archbishop hails ‘sense of convergence’ at Synod in Vatican

Primate of All Ireland welcomes debate on pastoral approach 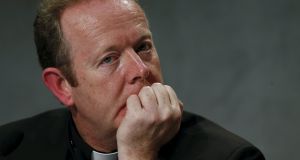 Archbishop Eamon Martin attends a news conference at the end of a morning session of the synod on the family at the Vatican. Photograph: Alessandro Bianchi/Reuters

The Archbishop of Armagh, Dr Eamon Martin, has said there has been a “sense of convergence” at the ongoing Synod of Bishops on the Family in the Vatican.

Saying that this, his first Synod, had been “a very special experience”, the Primate of All Ireland also referred to the pastoral approach debate that has dominated much of the last three weeks.

“One of the hallmarks of the Synod is that by opening up a space, sometimes an uncomfortable space, for people to speak from their pastoral experience, it has allowed us to deepen our understanding of the teachings of the church.”

If it were to end tomorrow, he said, the Synod would have already been worthwhile, even before a final message is written.

“The Synod is about finding synergy, about building on the experiences, the struggles, the hopes of bishops from all over the world.”

Earlier this week, the Sacred Heart of Mary sister Maureen Kelleher, one of 32 women serving in non-voting roles alongside the 270 prelates, raised concerns over conflicts at the event.

In an interview with US religious website NCR, she spoke of a “clear cultural division between bishops and lay persons points of view”.

Archbishop Martin was asked if the bishops were condescending in their attitude to lay people.

“I am sorry to hear about Sister Maureen’s experience,” he said. “As for the group of which I was the relator, we had a great richness and diversity within the group.

“The women in our group participated fully and frankly and very helpfully to our discussion,” he said. “They were equal contributors.”