Opinion: In 2014, the number of people seeking asylum will hit a 20-year high, according to the UNHCR 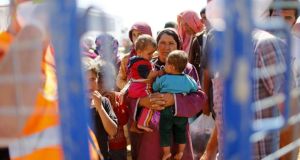 ‘Within a week, 150,000 refugees from Syria streamed into Turkey, adding to the million-plus refugees Turkey has accommodated in the three-and-a-half years since the devastating conflict in Syria began.’ Above, Syrian refugees cross the Syrian-Turkish border near Sanliurfa, Turkey, on September 26th. Photograph: EPA/Sedat Suna

Sitting in a cafe on Taksim Square in Istanbul last week, there were no signs of the crisis unfolding on the Turkish-Syrian border, 1,000km away. There were remnants, however, of the protests that engulfed Turkey in the summer of 2013, sparked by an initial sit-in at Gezi Park by Taksim Square. During protests that spread across the country, 11 people died, 8,000 were injured, and 3,000 were arrested.

This month, a fairly small environmental rally as part of a global day of climate change protest was surrounded by police, who are all too aware that the spark that lit the fuse of Turkey’s civil unrest last year was prompted by environmental concerns (the development of Gezi Park, one of the few public green spaces left in the sprawling city). On one of Istanbul’s main shopping streets, the police bookended the environmental protest as shoppers rushed past, some pausing to take photographs. Police hugged their riot shields, wore gas masks, clutched tear gas guns and other guns, and were backed up by water cannon vehicles, riot vans and reinforcements in nearby buses. But this act of defiance and oppression in the country’s largest city, and the sixth largest city in the world, was nothing in comparison to what was unfolding on the border.

As Syrian Kurds carried what little they had left into Turkey, the sea that borders the west of the country was in the midst of its own nightmare. The New York Times reported this month that at a funeral in Sicily of 18 migrants who died trying to reach Europe from Africa, Msgr Angelo Giurdanella said in his homily: “The opposite of love is not hatred, but indifference.” Around 120,000 migrants have been rescued by Italian ships in the Mediterranean this year. More than 2,200 have died trying to cross the Mediterranean this year. In a few days in mid-September, at least 750 migrants were feared to have died trying to make the crossing. To put those deaths in context in terms of media coverage, the Costa Concordia cruise ship disaster in January, 2012 claimed 32 lives. Nearly 70 times that number of migrants have died in the Mediterranean area trying to reach Europe so far this year.

The plight of the migrant, whether categorised as a refugee or an asylum seeker or an emigrant or an immigrant, is one of the most pressing issues of our time. The plight of internally displaced people equally so. Regardless of how “legitimate” one’s claim for asylum could be, imagine being so desperate that you would face death to escape? We were all migrants once. Many of us still are. We all came from somewhere, and many have travelled somewhere else. Our safety and stability in the world is no more than a geographical accident of birth. In many countries, including Ireland, migrants might be faceless to us, and thus viewed as subordinate. The most vulnerable of these people – victims of trafficking – deserve rescue, not imprisonment. The Immigrant Council of Ireland last week highlighted the terrible situation where traffickers have actually used asylum centres for residency themselves. We need to stop “othering” people who are essentially just like us.

Exceptional reporting on this disgruntlement should surely be highlighted: from the journalist Brian O’Connell, whose radio reports on the issue are an excellent contribution to Irish journalism; and from Carl O’Brien in The Irish Times. Still, ethnicity and creed have a huge part to play in the exclusion of the other. The photographs of people in direct provision protesting largely show black people. Black children holding up signs saying, “We were born here.” We need to start looking this issue itself straight in the eye, across borders and into containment centres, and ask ourselves, “What if that was me? What if that was my child?”