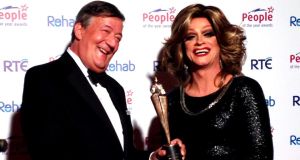 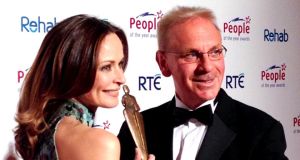 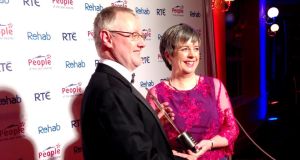 Rory O’Neill - aka Panti Blis - and Garda whistleblowers Maurice McCabe and John Wilson were among the winners of the 2014 People of the Year Awards.

O’Neill accepted his award in full Panti Bliss attire from British writer and actor Stephen Fry, who flew in specially to present it.

“When I was asked to present this award,” Fry said, “I would have swum over the Irish Sea (to do so).”

“(This award) is not about me,” O’Neill said. “It’s about the movement gaining ground in the country, I just happen to shine attention on it.

“I’m not really that special.”

In his acceptance speech, Mr Wilson thanked the country for its support following the Garda investigations. “It’s still a great country,” he said. “But gardaí are public servants, and some of them forget that.”

Award winner Louise O’Keeffe, who fought years of legal battles to get the State to accept responsibility for the abuse she suffered in a Co Cork primary school in 1973, said her award was for all the people who have suffered the same.

The Society of St Vincent de Paul won the Community Group of the Year Award, while Ireland-based Holocaust survivor Tomi Reichental was the winner of the International Person of the Year Award.

Owen Condon (17), who saved a man suffering a heart attack by performing CPR in time, won this year’s special category, the Everyday Hero Award, in association with the Nicky Byrne Show with Jenny Greene on RTÉ 2fm.

Celebrating its 40th anniversary, the annual ceremony was presented by Gráinne Seoige and broadcast live on RTÉ One from Dublin’s Citywest Hotel.

The People of the Year Awards offer the Irish public to honour people who have contributed to society and to local communities. Winners are all nominated by members of the public and finalised by a panel of adjudicators.

“Each year we are in awe of the stories of courage, determination and fortitude from all around the country,” said Sean Egan, chairman and interim chief executive of the Rehab Group of charities. “These awards allow us the opportunity to celebrate those unsung heroes among us who live in our communities, work in our schools, care in our hospitals, save people’s lives and fight for equality — they are true inspirations to us all.”

Complete list of the People of the Year Award winners:

* Maurice McCabe and John Wilson, who raised the alarm on corruption within An Garda Síochána, eventually leading to the resignation of then minister for justice Alan Shatter, and Garda commissioner, Martin Callinan

* Mary and Tony Heffernan, who dedicated their lives to caring for their children, Saoirse and Liam, both of whom suffered from Batten’s Disease, a rare, life-limiting, neurodegenerative condition. The Heffernans established the Saoirse Foundation in 2010 to promote awareness about rare and genetic disorders and provide specialised transportation services for sick children.

Liam’s Lodge, named after Liam Heffernan, will be Ireland’s first respite centre for families of children with rare diseases and is planned for completion towards the end of 2018. It will also serve as a children’s hospice for the families in the south and midwest of country. Saoirse passed away in 2011, and Liam in May 2014

* Paul Kelly, who founded Console in 2002 to support those bereaved by suicide and provide suicide prevention services and resources across the country. Paul’s sister Sharon died by suicide at 21

* Louise O’Keeffe, who struggled for 40 years to seek justice for the abuse she suffered at age 8 in primary school in Dunderrow, Co Cork. Though the teacher in question was convicted, the State refused to accept responsibility on behalf of the education system. In January, the European Court of Human Rights ruled in Louise’s favour, after she had lost a High Court action and then a Supreme Court appeal

* Owen Condon (17), winner of the Everyday Hero Award, who saved the life of Gerry O’Connell by performing CPR on the latter after he suffered a massive heart attack at a petrol station. Months before, Owen had performed CPR on a friend after an incident by the River Liffey, but the friend passed away

* Adam Horgan (15), one winner of the Young Person of the Year Award, who dived in and saved Vicky Morey and her five-year-old son Evan off the Youghal coast in Co Cork in 2013 when mother and son had difficulties in the water

* Shane Kennedy (20), the other winner of the Young Person of the Year Award, who has devoted himself to caring full time for his brother, Cian, born October 2013 with cri du chat syndrome, a chromosomal disorder, and partial Down Syndrome; a year ago Shane had undergone brain surgery to remove a benign tumour

* The Society of St Vincent de Paul, winner of the Award for Community Group, whose 11,000 volunteers make about 8,000 visits each week to support people in need

* Tomi Reichental, winner of the International Person of the Year Award, a Holocaust survivor born in 1935 in Slovakia and survived the notorious Bergen Belsen camp at age nine. He relocated to Dublin in 1959. Now he visits schools to highlight the impact of the Holocaust and promote tolerance and reconciliation. He published his first book in 2011 on his experience in Belsen, and is now writing his second book.