Numbers sleeping rough in Dublin down by almost 40% 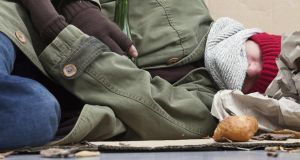 The number of homeless adults in emergency accommodation increased by more than 300, up from 1,526 in November to 1,872 this month.

The number of people sleeping rough in Dublin has fallen by almost 40 per cent since the winter.

However the number of adults in emergency accommodation in the capital has increased by 24 per cent and by far higher numbers than the decrease in rough sleepers.

The results of the annual “spring count” of rough sleepers published on Thursdya by the Dublin Region Homeless Executive shows 105 adults were found sleeping on the streets on the night of April 14th. This compares to 168 in the winter count conducted on November 21st.

In addition, 46 people were accommodated overnight in a new night cafe on April 14th. This opened in January.

This most recent count, which was conducted across Dublin’s four local authority areas, was the first since the death of Jonathan Corrie in December. Mr Corrie died in a doorway on Molesworth Street, close to Leinster House. His death gave rise to widespread calls for urgent measures to address rough sleeping in the city.

Minister for the Environment Alan Kelly said he was “very happy” with reduction in rough sleeping but he remained acutely concerned about the number of homeless families.

“The real issue in relation to homelessness is addressing the situation with families and that is the critical area that I’m focusing a lot more of my attention on.”

He said he needed cooperation in relation to his homelessness proposals, and was not prepared to be “lectured” to by Dublin city councillors who had voted down plans to use vacant flats in O’Devaney Gardens, an estate earmarked for demolition, for families.

Following an emergency meeting before Christmas, Mr Kelly sanctioned funding for an additional 280 emergency beds. All emergency beds in the city are now running at 100 per cent capacity and a spokeswoman for the homeless executive said “continuing arrangements are in place to provide further emergency beds...in an effort to respond to the significant step-up in demand for homelessness services”.

Charities such as Focus Ireland and Dublin Simon have reported a continuing upward trend in numbers accessing its rough-sleeper outreach service.

Chief Executive of Dublin Simon described the increasing numbers in emergency accommodation and in the night cafe as “phenomenal”.

“More than 3,000 adults and children are facing homelessness daily, trapped in despair and uncertainty, with nowhere to go. This could be as high as 3,500 by June 2015 if no significant action is taken to permanently house adults, parents and children. This is a catastrophe and a shambles - it is just not good enough, more must be done now.”

“There are no places left in hotels, guesthouses and emergency units. People are forced to forage for themselves in a scarce and discriminating housing market where they cannot compete.”

Focus Ireland said the count confirmed the “deterioration in homelessness” in Dublin.

“All emergency beds were full on the night of the rough sleeper count. There is a continuing increase of new people becoming homeless with some ending up sleeping rough.

Of the 105 people found sleeping rough on the night of April 14th, 88 were male, 15 female and two unknown.