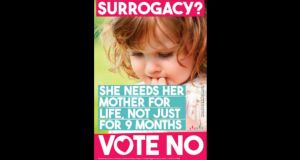 A legal adviser to the Mothers and Fathers Matter group, Tom Finnegan, referred to a poster (above) erected by the group in recent days referring to surrogacy which he acknowledged was “probably the most controversial” of its three posters.

The Government is “deliberately misleading the public” by claiming the same-sex marriage referendum has nothing to do with children, a conference advocating a No vote has heard.

About 180 people attended an event organised by Mothers and Fathers Matter, a group campaigning for the retention of the current definition of marriage in the Constitution, held in the Marino Institute of Education in Dublin.

A legal adviser to the group, Tom Finnegan, referred to a poster erected by the group in recent days referring to surrogacy which he acknowledged was “probably the most controversial” of its three posters.

However, he said surrogacy and donor-assisted reproduction were issues that were “clearly relevant to the discussion about redefining marriage”.

Mr Finnegan said that, if the referendum passes, homosexual married couples would have the same constitutional status as any other married couple.

“For same-sex couples to procreate, to have a right to procreate... that right must necessarily entail a right to avail of things like donor assisted human reproduction or surrogacy,” he said.

Louise Doris, a consultant on bioethical issues and PhD student at the European University Institute, said surrogacy bans in place in other countries had come under increasing pressure because of the introduction of same-sex marriage.

“What I have observed, particularly in Spain, France and now in Ireland, [is] that the confluence of assisted reproduction and the advent of same-sex marriage conspire to drive traditional family rights off their moorings,” she said.

“Same-sex marriage, wherever it has been introduced, has been an accelerant in driving demand for permissive laws on donor-assisted and surrogate-assisted reproduction and also a proliferation of legal and ethical uncertainties,” she added.

Earlier, the event heard from London-born Elizabeth Howard who found out at the age of 15 that she was donor-conceived.

Ms Howard said this discovery had resulted in a “loss of identity”, “disenfranchised grief” and left her feeling “like a freak... uniquely weird and uniquely isolated”.

Ms Howard said she wished to stress that she does not believe that those who avail of donor conception are bad people, and added that she did “not underestimate the grief” suffered by those who wish to have children but are unable to do so.

“But the solution for their grief is not by creating grief for someone else by depriving them of the experience of being brought up by a biological parent,” she said.

“Donor conception is wrong and should be outlawed by any country which respects human rights,” she said.