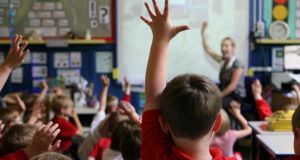 One in three families with primary school children are worried about their budget for food, new research has found.

The number of children coming to school hungry has increased in the past year, according to 77 per cent of teachers surveyed in new research on food poverty.

That figure rises to 22 per cent in disadvantaged schools. However, the research did not include homeless people, Travellers, people in institutions or asylum seekers; the study says “any figures proposed are intuitively likely, in all probability, to be slightly higher”.

The figures are contained in Is the Food Divide Getting Bigger? commissioned by Kellogg’s with research and analysis by market research company Behaviour & Attitudes and economist Jim Power. It comprises a survey of 3,000 adults as well as a separate survey of 408 teachers.

It found that one-fifth of families were worried about the amount of money they had to spend on food, but that increases to one in three families when it came to households with primary-school children.

The study found the food poverty rate among lowest income households was as high as 11 per cent while 4 per cent of highest income groups said food poverty was an issue.

“This is our experience, too. Children arriving to school hungry are affected in many ways. It has an impact on their behaviour and mood that day, but more worryingly, long-term hunger can have a long-lasting impact on their education as it affects the ability to concentrate,” he said.

“It affects their interactions with classmates and teachers as they can be more irritable and restless. And if hungry children aren’t given support to thrive, it can also have a knock-on effect on the wider class.”

Half of the teachers surveyed said more than one-third of parents had mentioned concerns over their ability to make their food budget stretch to the end of the week. Asked how the issue could be tackled, teachers called for more breakfast clubs in schools and community- based programmes for parents to help them make good food choices for their families.

The report also calls for greater support for food banks and local charities and says the school meals programme needs more funding to ensure that schools can meet the demand for breakfast clubs and school lunches.

It says education in schools should be focused on food education and the importance of teaching cooking skills.

Economist Jim Power said €7.95 billion was spent on food in 2008 compared with €7.72 billion in 2013. “Food poverty was made worse by the economic crisis and this should abate as the economy improves,” he said. “However, a micro-focused and multifaceted approach is essential to alleviate the issue for those most at risk.”