Festival is worth €122 m to the capital and is packed with cultural events, says Ring 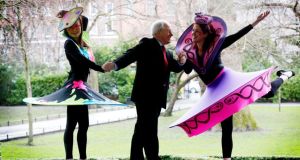 If the Lord Mayor of Dublin Oisin Quinn has some positive contribution to make to the St Patrick’s Festival he should contact the organisers and get involved, Minister for Tourism Michael Ring has said.

Speaking at the launch of the festival programme in St Stephen’s Green today Mr Ring said the festival was worth €122 million to the city and he was “surprised” at Mr Quinn’s critique of this year’s programme as “tacky” and designed for those who want to drink alcohol and “throw on leprechaun hats”.

“Dublin is our Capital city, this is a national festival. This brings thousands of people in, as I said it is worth €122 million to the local economy, over €100 million of that comes from outside the State and that kind of funding is very welcome”, Mr Ring said.

Mr Ring said he himself would be travelling to The Netherlands to represent Ireland at St Patrick’s Festival celebrations there. But he said on the actual day he would be at the parade in Westport in his Co Mayo constituency.

Mr Ring who was joined at the bandstand in St Stephen’s Green by children in pink, green and purple clothing, as well as exotically dressed characters from nursery rhymes, said the Lord Mayor and the city council “have a member on the board” of the organising group. “If he wants to put something else alongside this festival he is very welcome to do it, ” Mr Ring said.

He insisted the festival was a very positive Irish message and if Mr Quinn wanted to make a contribution “he has a representative on the board - any ideas he has, we will listen to them”.

The St Patrick’s Festival Programme will kick off on Friday March 14 and includes an “I Love My City cultural programme now in its third year with events at the National Gallery, National Concert Hall, National Library, Dublin City Gallery, The Royal Hibernian Academy (RHA), The Little Museum, Earlsfort Terrace.

“It’s one of our most important events for international visitors, whose numbers rocketed to 140,000 overseas people last year. That’ s 37percent higher than in 2010. It’ s also a unique opportunity to showcase our talent to the world”, Mr Ring said.