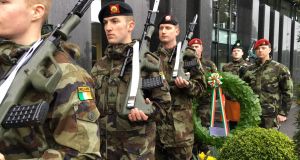 Guard of honour by the 1st Battalion, Galway, at Glasnevin cemetery on Sunday. Photograph: Cyril Byrne

The Lord Mayor of Dublin Sinn Féin Cllr Críona Ní Dhálaigh was absent from Sunday’s ceremony at Glasnevin cemetery where a “Remembrance Wall” naming all who died during Easter Week 1916 was unveiled, including civilians, rebels, police and British soldiers..

She was represented at the ceremony by Independent Cllr Ruairí McGinley who told The Irish Times that Ms Ní Dhálaigh was not there because of “a family emergency”.

Her absence, he said was “absolutely not for political reasons”.

Sinn Féin’s Aengus Ó Snodaigh criticised the wall at Glasnevin cemetery, saying it was “totally inappropriate for a memorial wall to list indiscriminately together Irish freedom fighters and members of the British crown forces”.

“Everyone should have the right to remember and honour their dead, whether they were Irish republicans, members of British crown forces or civilians. That is catered for already within Glasnevin cemetery with its many and diverse memorials and graves,” he said.

Prior to the unveiling leaders of the main churches and faith groupings led prayers, with a reading from a representative of the Humanist Association of Ireland.

In an address, chairman of the Glasnevin Trust John Green said “today we unveil the 488 names of those known to have died in the Easter Rising – 119 were serving in the British army. There were 268 civilians, one from Fianna Eireann, five members of the Irish Association of Volunteer Training Corps, 15 members of the Irish Citizen Army, 63 Irish Volunteers, and 17 from the police forces. Behind each and every one of these lost lives, lies a story of heartbreak, no matter what side the person was on or indeed for the people innocently caught up in the conflict.”

The Wall would in time simply record “the facts of those who died as a result of political conflict on this island from the Easter Rising to the the end of the civil war”.

There was, he said “no hierarchy, no judgement on this wall, essentially viewing the dead through a human prism. This wall is in absolute step with the foreword to the 1916-2016 Centenary Programme, which states: ‘All lives are equal in value,and 2016 must be a year in which the narratives of everyone on the island of Ireland is included and heard’,” he said.

Glasnevin “has been an inclusive, all embracing cemetery since its foundation,” he said and it was “the final resting place for 224 identified killed in the Easter Rising.” Among those was Gerald Neilan, “one of the first British soldiers killed on Easter Monday and his younger brother Arthur who served with Ned Daly in the Four Courts.” Both brothers rested “one on top of the other” perhaps summing up “the complexity and the emotion of this great week in our history,” he said.

Taoiseach Enda Kenny laid a wreath at the Remembrance Wall, with a card attached which read: “In honour of all those men, women, and children who died during 1916.”

This was followed by a minutes silence and the Last Post, at which the tricolour was raise to full mast. Reveille was played followed by the national anthem which concluded the ceremony.