Analysis: Whether councils can achieve aim debatable but return of provision welcome 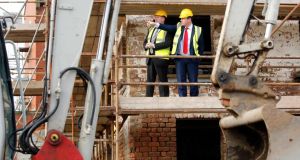 The target of providing more than 20,000 new social housing units by the end of 2017, announced yesterday by Minister for the Environment Alan Kelly, is undoubtedly ambitious.

However, there are real questions as to whether this target, which has been laid at the door of local authorities to deliver, is achievable.

Claims made yesterday about the impact these targets, if reached, will have on housing waiting lists are also questionable, given they are based on waiting list figures gathered almost two years ago.

To be positive, many will welcome the return of local authorities to social housing provision after eight years of almost total absence.

The targets, which set out exactly how much money will be allocated to each of the 31 local authorities and how many units they are to deliver by the end of 2017, put some meat on the bones of Kelly’s Social Housing Strategy 2020, published last November.

Kelly also said the plan would accommodate 25 per cent of those on housing waiting lists.

What is not spelled out, however, is from where the new units will come. What proportion will be newly-built homes, refurbished long-term voids, leasing agreements with private landlords under the Rental Accommodation Scheme (RAS) or long-term leasing arrangement with landlords or developers? Local authorities and the Department of the Environment have been in discussions about this since January.

When asked yesterday about what proportion of units would come from which source, the department said it was a matter for local authorities, while they in turn said they awaited instruction from the department.

Some clarity is provided by a letter from Larry Kelly, private secretary at the department, to People Before Profit councillor in Dún Laoghaire, Karl Gill, dated 12th March. He told Gill some 7,400 new social housing units were planned this year.

Acquiring 70 per cent of this year’s target through agreement with private landlords and developers presents a huge challenge to local authorities.

Many private landlords are opting out of RAS, preferring the private market, where higher rents can be commanded. Whether developers will want to get into long-term arrangements with local authorities in the numbers needed remains to be seen.

It is also important to point out these will not be council houses, which provide security.

This reliance on the private sector is interesting in the context of assertions made by the Minister in October, that: “The privatisation of social housing should never have happened . . . It was wrong, and it was more than wrong, it was simply unacceptable and we are going to change that.”

Claims made about the impact the plan will have on current waiting lists are questionable, given the waiting list figures being used to assess impact were gathered by the Housing Agency in May 2013.