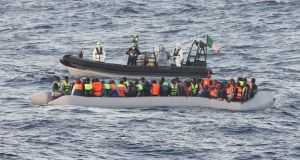 A rib from the Irish Naval Service ship LÉ Samuel Beckett is seen rescuing more than 100 people, including two children, off the Libyan coast on Thursday morning. Photograph: Defence Forces

The Naval Service patrol ship LÉ Samuel Beckett has rescued more than 100 people, including two children, from an inflatable craft off the Libyan coast on Thursday morning.

It is the second humanitarian rescue for the vessel, which took over from the LÉ Niamh at the start of the month as the Irish Defence Forces’ ship in the Mediterranean assisting with the rescue of migrants.

According to the Defence Forces an inflatable craft carrying migrants was spotted about 50km north-west off the coast of Tripoli.

A short time later the LÉ Samuel Beckett took 102 people on board and gave them food, water and medical attention where required.

Ten days ago the ship rescued 242 people from a wooden craft in the same area, some 93kms from the coast, and also brought another 232 people from another rescue vessel, to a port in Italy.