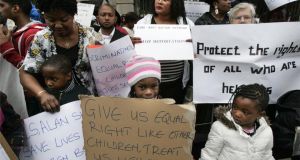 People at a rally outside Leinster House protesting about the treatment of asylum seekers on World Refugee Day in 2011. Photograph: Dara Mac Dónaill

Children often go through a stage of night-time fears, including being afraid to get up to go to the bathroom on their own. Parents usually soothe and reassure them until the night-time fears pass.

For some children, though, their parents are the ones with fears, and the ones who are enforcing strict rules about never visiting the bathroom alone at night. I met one such child last week, who lives in two small rooms with her family. They have no bathroom or toilet, but share facilities with many people from very diverse countries. The dangers are real.

I’d love to tell you more about that little girl, but I can’t, because she made me promise not to say anything that could identify her. She and her family are terrified that if they are found complaining about their lives they will receive a summary notice to pack up and move to another centre at the other end of the country.

The little girl likes her school. She doesn’t want to start all over again somewhere new, because she has had to do that numerous times already. That detail won’t identify her, because it is true of so many children stuck in our inhumane and unjust asylum-seeker system. They are living in “direct provision”, a term that hides the reality of their lives.

On average, asylum seekers spend three years in a system that is costly and unfair. Some spend seven years or more.

Direct provision involves prolonged, enforced institutionalisation, where you can never cook a meal, or be sure a child’s friend will be allowed to visit, or if they do, you will be ashamed because you are unable to offer them a snack.


Torturous limbo
Our current system alsoprevents asylum seekers from finding work, and forces them to depend on the meagre bounty of the State. One man said to me that if you have worked in your own country, not even being allowed to apply for a job is like torture.

Some of them spoke of where they live as a prison, not literally but because their quality of life is so poor, and they become virtually institutionalised. Surely the long-term social consequences of this will be serious? And yet, if we do eventually deign to let asylum seekers stay, we expect them to adjust to living autonomous lives, and to become productive citizens.

I spoke to another man last week who managed the rare feat of being recognised as a refugee with a legitimate right to remain in Ireland. He spent six years in the system, and was moved from centre to centre six or seven times. It seemed to him that it was all designed to prevent him from putting down roots or integrating. He is certain that his mental health suffered.

In December 2012, there were 4,829 asylum seekers in 35 centres in 17 counties. Only three centres were purpose-built. Most are completely unsuitable. Yet the State paid €655.5 million to those providing accommodation from 2000 to 2010.


Fearful isolation
People living in direct provision are isolated, lonely, bored and fearful, and they and their children are sometimes malnourished. There is dreadful insecurity, and hanging over them all the possibility of deportation, when police will swoop in at 5 or 6am and give them less than an hour to pack.

In 2012, Minister for Justice Alan Shatter promised the Council of Europe Commissioner for Human Rights that he would publish comprehensive draft asylum legislation “early next year”. However, reform of legislation alone will do nothing for the 4,829 asylum seekers in the system, of whom 38 per cent are children.

Only reform of direct provision will do that. People are fearful even of making complaints. Why not make direct provision part of the remit of Ombudsman Emily O’Reilly, so that the system has independent oversight?

What should the legislation look like? There is a desperate need to streamline the application process. There should be “one-stop shops” established where asylum seekers could access legal information and treatment for medical conditions and trauma. All of this would help applicants to make better cases with proper evidence, resulting in fairer decisions and fewer appeals.

Direct provision was initially designed for a six-month period, and no one should spend longer than that before moving to self-catering accommodation. Ireland should also sign up to an EU directive on the right to work after a specified period.

For the little girl and the family I met, all of that is a pipe dream. For them, reality is poverty, overcrowding, chronic anxiety, and a life where a night-time trip to the bathroom is scary not just because of an overactive imagination.