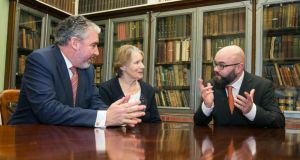 Immigrant Council of Ireland chairman John Cunningham (from left) and Sr Stanislaus Kennedy (the founder of the council) speak to Brian Killoran, who has been appointed as the council’s new chief executive. Photograph: Naoise Culhane.

The Immigrant Council of Ireland has appointed Brian Killoran as its chief executive.

Mr Killoran, who has worked with the organisation for more than 10 years, is to succeed Denise Charlton in the role in March.

He said his key challenges would be working towards the delivery of a Sexual Offences Bill, which is expected to include laws to end demand for prostitution and trafficking; completing a review of Irish hate crime legislation; and campaigning for immigration reform.

“I look forward to working with our team, the board and our many supporters to progress towards these goals in 2015 and into the future,” said Mr Killoran, a native of Roscrea, Co Tipperary.

Founded by Sr Stanislaus Kennedy, the Immigrant Council of Ireland campaigns for rights and protections which benefit Irish citizens, migrants and their families.

Ms Charlton, who has been the council’s chief executive for 13 years, is leaving to start a new business but will continue to work with the council on policy.