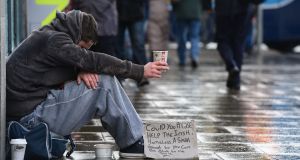 The “most ambitious social housing project in the history of the State” would result if Minister for Housing Simon Coveney implements the report from the Oireachtas Committee on Housing and Homelessness.

The cross-party committee published its 157-page report yesterday, though without one of the members in attendance.

Issuing her own minority report Ruth Coppinger (PBP-AAA) said the target of 50,000 new social housing units over the next five years lacked ambition and called for 100,000 units.

However, other committee members said 50,000 units, to be built, bought or refurbished by local authorities or approved housing bodies, was the minimum recommendation and this figure was “doable”.

A number of members, including Sinn Féin’s Eoin Ó Broin described the figure as “the most ambitious” in the State’s history, saying it would amount to a “trebling” of the real output envisaged in the previous government’s Social Housing 2020 strategy.

Committee chair John Curran from Fianna Fáil described it as “evidence-based” and he “sincerely hoped” it would be central to Mr Coveney’s considerations in drawing up Government strategy to tackle what many members called the “housing emergency”.

The committee grappled with the European Commission’s fiscal rules which mean any Government spending – including by local authorities – is constrained by the need to maintain a balanced budget.

The committee recommends the Government “urgently seeks flexibility from the European Commission” on these these rules, to pay for social housing. “The Committee will also express its view on this to the Commission,” they say .

In the meantime, the report calls on Government to “provide the maximum possible direct exchequer investment to the provision of social housing” and to establish off-balance sheet funding mechanisms.

On the growing numbers of private rented households, the committee calls for a rent-certainty model linked to an index such as the Consumer Price Index; an increase in lease- lengths from the four-year maximum, up to and including life-long leases; legislation to outlaw the sale of property as a grounds for evicting tenants. It also says rent supplement should be increased to meet market rents.

The vacant site levy, not yet in force, should be “stronger” and a tax on empty homes should be implemented. It calls for increased supports for first-time buyers such as a special savings scheme.

On homelessness it calls for the rapid-build modular housing under way in Dublin to be completed “without delay”. For those in mortgage arrears, there should be a moratorium on home repossessions.

*Increase the social housing stock owned by local authorities and approved housing bodies by 50,000 over the next five years, through build, acquisition and refurbishment

*Establish a housing procurement agency with staff from the Housing Agency, NTMA, Department of Housing and Department of Finance

*Introduce rent certainty, with rents linked to an index such as the Consumer Price Index

*Increase use of measures on mortgage distress such as mortgage to rent, split mortgages and debt-write downs

*Help first-time buyers with, for example, a savings scheme