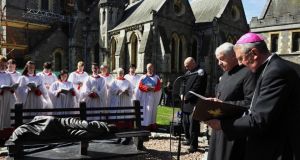 A new Homeless Jesus sculpture, the first of its kind outside North America, has been unveiled in the grounds of Christ Church Cathedral in Dublin.

The work by Canadian sculptor Tim Schmalz is a 7ft cast bronze park bench, depicting Christ hidden beneath blankets - his identity betrayed only by the holes in his feet.

Designed to prompt public reflection on the plight of the homeless, it has been presented by an anonymous North American Episcopalian benefactor.

A competition for the most appropriate location for Homeless Jesus was launched by The Irish Times last December when readers were asked to nominate preferences. They voted for it to be placed on Molesworth Street or on the plinth at Leinster House, near where a homeless man, Jonathan Corrie, died last year.

However, Mr Schmalz , a devout Catholic, visited locations on a trip to Dublin in January and decided on Christ Church Cathedral as “it is the spiritual heart of Dublin”.

Church of Ireland Archbishop of Dublin Dr Michael Jackson said the statue was testimony to those who maintained a capacity for life “in the midst of danger, distress, degradation and deprivation”.

The ceremony was also presided over by Catholic Archbishop of Dublin Dr Diarmuid Martin, who invoked the memory of Jonathan Corrie.

“As long as there are people who cannot find a suitable roof over their head and families without a place where they can live with dignity, then none of us can roll over in our comfortable beds with an easy conscience,” he said.

The Homeless Jesus sculptures are appearing in cities across North America, but Mr Schmalz said there were still 10 fully funded pieces seeking homes in other countries.

“Even walking up here [to Christ Church] I encountered three different homeless people and I was thinking, why didn’t I give the last person money,” he said.