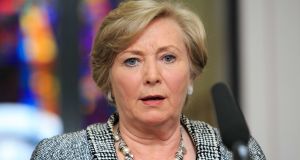 Tánaiste and Minister for Justice Frances Fitzgerald described abortion as a “very live issue” adding however that none of the recommendations made was “possible under the current regulation of constitutional and statute law”. Photograph: Gareth Chaney Collins

The Government has pledged to consider a significant liberalisation of abortion law, as recommended by 18 United Nations member states earlier this week.

The commitment was among many made on Friday which in all amounted to a “watershed” moment for human rights, the Irish Council for Civil Liberties (ICCL) said.

Some 262 recommendations were made to Ireland during its Universal Periodic Review (UPR) of human rights, at the UN in Geneva earlier this week.

A total of 152 of these recommendations have been immediately accepted, including ratification of the Convention on the Rights of Persons with Disabilities (CRPD), which provides for legally-binding rights for people with disabilities. The Optional Protocol to the Convention Against Torture (OP-CAT) which protects prisoners from torture and cruel and degrading treatment was also ratified.

Among other recommendations accepted in full are that the gender pay gap be addressed, that a domestic violence Bill be implemented and that hate crime be combated.

The Government agreed to “examine” 97 recommendations and “provide response in due time but no later than . . . September 2016”.

Most significant is the agreement to consider recommendations to increase access to abortion. When Ireland last underwent this review in 2011 all abortion-related recommendations were rejected.

Norway recommended that Ireland “revise its legislation on abortion, including its Constitution, to provide for additional exceptions in cases of rape, incest or serious risk to the health of the mother”.

Speaking at the review on Wednesday, Tánaiste and Minister for Justice Frances Fitzgerald, described abortion as a “very live issue” adding however that none of the recommendations made was “possible under the current regulation of constitutional and statute law”. She outlined plans to establish a citizens’ assembly this year to consider the issue and report to Government.

The ICCL which led a delegation of NGOs to Geneva, on Friday welcomed the “significant pledges to improve human rights.”

Executive director Mark Kelly said: “Ireland’s reaction to the 2016 UPR will come to be seen as a watershed moment in the protection of rights and equality in this State.”

He “particularly” commended the pledge to provide independent monitoring of all places of detention and independent oversight of the treatment of people with disabilities.

“On the issue of abortion, the ICCL notes that there has been a sea-change in the Government’s attitude to criticism of our highly-restrictive abortion regime since Ireland last appeared before the UN Human Rights Council in 2011.

“At that time, Ireland rejected all recommendations to bring its law into line with international human rights standards. This time, none of the dozen solid recommendations on abortion law reform have been rejected and the Government has undertaken to give a full report on how they will be implemented to the United Nations by September 2016.”

A further 13 recommendations included ratification of the International Convention on the Rights of Migrant Workers (ICRMW) and ending the use of non-jury special criminal courts.

Cora Sherlock, spokeswoman for the Pro-Life Campaign, said the UN placed a “the rights of the unborn child at zero”

“The new Government should not passively roll over and accept the UN’s criticism of the Eighth Amendment, like the previous administration did. In effect the UN is pressuring Ireland to single out a vulnerable category of human beings and strip them of any legal protection.

“Abortion advocates will call this ‘progress’ but they should not be allowed gloss over the fact that abortion involves ending the life of an innocent and defenceless baby who deserves our love and solidarity and the same chance at life that the rest of us were given.”