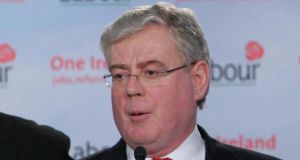 The Government is deeply concerned by allegations of mistreatment of children at a number of creches, Tanaiste Eamon Gilmore has said.

Mr Gilmore described the reports of inquiries in the Dublin childcare centres as “shocking” and insisted Minister for Children Frances Fitzgerald would give it her highest priority.

“Parents need to have confidence and trust in the people who are looking after their children. As a Government we are deeply concerned.”

Gardai have confirmed an investigation has been launched into allegations of mistreatment in childcare facilities in north and south Co Dublin.

A separate inquiry is under way by the Health Service Executive (HSE), following issues raised by RTE which is producing a programme on standards of childcare.

Details of the alleged abuse have not been disclosed. A Garda source told The Irish Times last night the incidents are likely to be “on the lower end” of the scale in terms of child-protection concerns.

The Giraffe childcare centre in Belarmine near Stepaside in south Dublin confirmed a complaint was made against it after an RTE researcher went undercover as an edu-carer and secretly filmed the centre. The broadcaster also informed gardai of the alleged mistreatment of children at the centre, and a complaint was filed with the HSE in late April.

A second creche involved is the Links Childcare in Abington, Malahide, Co Dublin.

The Tanaiste said Ms Fitzgerald would follow the issue closely as it unfolds and would take “a personal interest” in the investigations. “I think basically what we need to have here is that parents are assured that the Irish childcare sector is safe, that practitioners are committed to ensuring the highest standards of care for children,” Mr Gilmore added.

In a statement the HSE said it received reports from gardai on three childcare facilities on Tuesday. “HSE children and family services are working with An Garda Siochana to review the reports and make an assessment with respect to any child welfare and protection concerns,” it said.

The Government recently updated its Children First national guidelines, which were introduced for the protection and welfare of children.

Mr Gilmore said work was being done to finalise legislation to put compliance to the guidelines on a statutory footing.

“The mistreatment or abuse of children is unacceptable in any setting and any and all such incidents should and must be reported to the relevant authorities as has rightly happened in this case,” he said.

RTE confirmed its current affairs investigations unit had carried out research on a number of childcare centres for a forthcoming Prime Time programme. A date for broadcast has not been given. It has been in contact with parents of the children allegedly affected and is liaising with gardai.